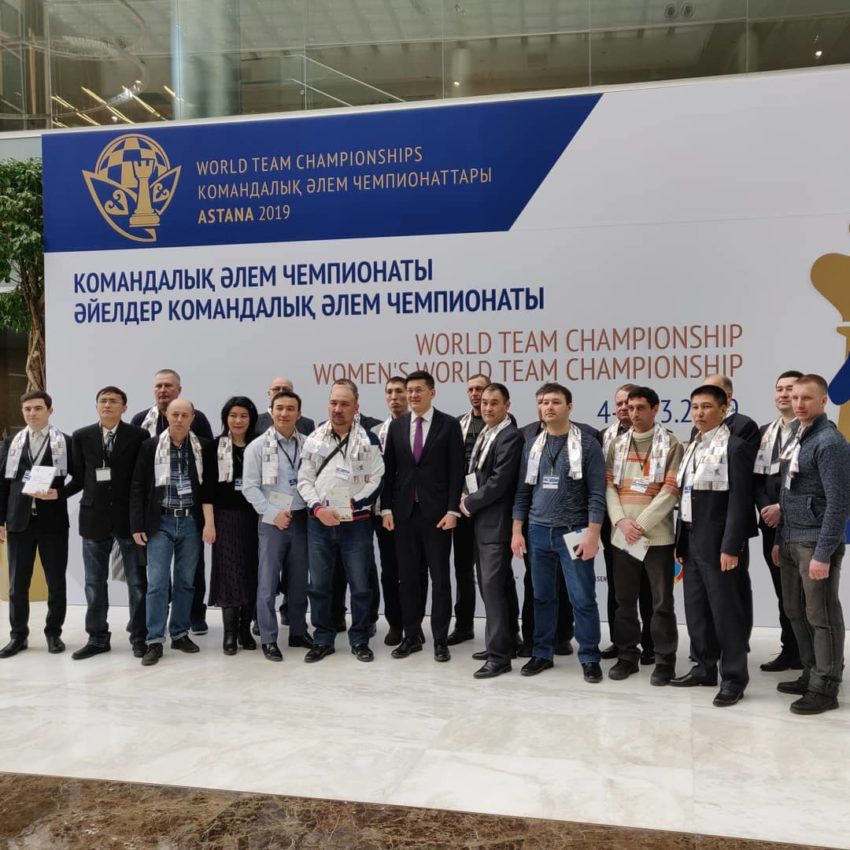 The World Team Chess Championship is a biannual event, where players from 10 countries around the world compete against each other to determine the strongest team.

The competition began in 1985 and is considered today to be one of the most important international team chess tournaments.

Eurasian Resources Group is a general partner of this year’s World Team Chess Championship and will also take part in awarding prizes at the ceremony in Kazakhstan. Mr. Aldiyar Kaztayev, First Deputy CEO of Eurasian Resources Group, took part in the award ceremony, commending the winners. This is the first ever world chess tournament to be held in the Republic of Kazakhstan and ERG has done an exceptional job organising it. The Championship event is organised under the umbrella of FIDE, the Word Chess Federation, known by the acronym for its French title, Fédération Internationale des Échecs.

Being a general partner of the World Team Chess Championship is testament to the Group’s commitment to the value of sport and culture. Employees at ERG have also been invited to participate in an in-house chess championship, with winners going on to challenge Darmen Sadvakasov. Sadvakasov is a Kazakh chess grandmaster and winner of five national championships.

The 2019 World Team Chess Championship event is being held in Astana in Kazakhstan between the 4thand 15thof March, with both the men’s and women’s events running together. As one of the leading businesses in Kazakhstan, Eurasian Resources Group is partnering with FIDE to act as general partners for the event.

“Chess is currently at the peak of its popularity worldwide,” commented Alexander Machkevitch, Chairman of the Board of Directors of Eurasian Resources Group. “In Kazakhstan, we attach great importance to this sport, and there are chess clubs in many schools across the country. I believe that this is a far-sighted move, as chess helps to develop logical thinking and a strategic vision. This year, ERG celebrates the 25th anniversary of the start of its business in Kazakhstan, and we encourage interest in chess among our employees. This is why we act as a general sponsor of the World Team Chess Championship, which is held in Kazakhstan for the first time.”

ERG stands for “Eurasian Resources Group”. This company is a leading diversified natural resources producer. Their support has been decisive to make this event happen here in Astana. https://t.co/wSkscMvTc5

The strongest national chess teams from around the world are eligible for participation in the World Team Chess Championship, with some teams representing a continent rather than a country. Each team consists of four players, except for in the inaugural 1985 event where teams had six players. Each team is also permitted reserve players. Each team plays a full round, competing against all the other participating teams during the event. Between 1985 and 2007, the final rankings were determined by individual scores. Since 2007, it has been the team results that determine the final scores. A separate championship event for female players was also introduced in 2007 and has been played alongside the men’s event every two years since.

FIDE was established in 1924 to act as the global governing body for all major chess events and competitions, connecting chess federations from around the world. The most visible activities of FIDE are organising the major world tournaments, including the World Team Chess Championship, the World Chess Championship and the Chess Olympiad. The International Olympic Committee recognises FIDE as the supreme organisational body for international chess and FIDE holds responsibility for defining the rules of chess and setting regulations.

Eurasian Resources Group, or ERG, is a leading diversified natural resources producer. Originated in Kazakhstan and headquartered in Luxembourg, ERG has operations spanning 15 countries on four continents and is one of the industry’s major employers. ERG operates with a sustainable approach to business and a belief in giving something back to the local communities in areas where the company has operations.