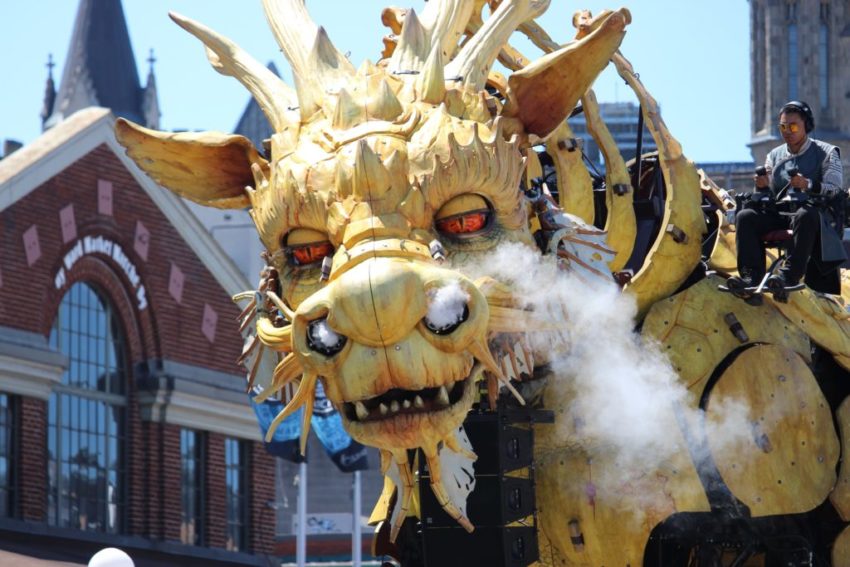 It is made up of a stainless steel frame with a movable head, electronic components, and a foam outer shell. You can get them from onlydinosaurs.

The person operating the costume can see by way of a camera in the dinosaur’s nose. There is a monitor inside the costume through which they can view what the camera picks up.

The head of the dinosaur can be moved around similar to an ostrich head. The operator can lift the head up high and then swoop down to near-ground level. It can also be turned to ninety degrees or more to the left and right. This makes the movement of the costume quite realistic.

The costume is equipped with a sound unit and a speaker so it can roar just like a real dinosaur too. The sound is controlled by the operator inside the costume.

The outer shell is sculpted from foam rubber, similar to many stage puppets. It has a realistic texture that looks like skin.

The costume is pretty big. From nose to tail it is around fourteen feet long. From the ground to the middle of the spine, it is seven feet high. These are very impressive costumes.

In this version of the dinosaur costume, the operator is completely hidden. Their legs fit snugly inside the costume’s dinosaur legs.

While this does mean the operator can’t be seen at all, it doesn’t make the costume more realistic. The dinosaur legs have to be fatter and straighter than real dinosaur’s legs to accommodate the human legs of the operator.

Depending on the type of costume, the operator may have to stand on small stilts within the legs of the costume.

Movement is less realistic as you can tell it is a human wearing a suit. The top half of the dinosaur looks great but then you look down. It is harder to suspend disbelief when the dinosaur legs are so fat.

It is a trade-off. You have to decide if you want the dinosaur to move realistically, or you want the operator’s legs to stay hidden.

The suit still looks great though. My description might make it sound like I’m nitpicking, but one of these massive costumes will look fantastic no matter which version you get. Hidden legs look a little better with a large dinosaur, like a tyrannosaurus-rex.

The other type of costume has realistic chicken legs for the dinosaur. Of course, this means that the operator can’t fit their legs inside them.

To solve this problem, the operator wears a plain-colored leotard, usually black. Their legs come out from the belly of the dinosaur and their feet attached to the dinosaur feet.

What you get is a realistic-looking dinosaur with two human legs coming out of its belly. As long as you don’t look at the human legs, the costume looks fantastic.

The costume moves like a real dinosaur. As the operator walks, the dinosaur legs walk in unison with their steps. This version looks great with a velociraptor costume.

This will work best if the costume is used at night and the operator wears a black leotard to cover their legs. For the most part, their legs won’t be visible.

If you are filming, you could have the operator wear a bright green leotard. That way, their legs can easily be edited out, just like green screen technology.

There is one more type of costume. This is for four-legged dinosaurs such as the triceratops.

It looks better to have hidden legs on this type. Probably because of the stumpy legs of the triceratops. Its legs are already short and fatter than other dinosaurs, so there’s plenty of room to fit human legs.

If you want to picture it, the triceratops costume is eighteen feet long and eight feet high. It is not small. This looks amazing up close, especially when it turns its head towards you and blinks.

There is plenty of room inside for the two operators. They have monitors for viewing, along with the sound unit and fans to keep the air circulating. Good fans are necessary as the foam rubber and the small, enclosed space inside can make the suit pretty hot.

Whether you like the two-legged or four-legged costumes, they are controlled in the same way. The head of the dinosaur has a shaft the leads back inside the body. At the end of the shaft is a butterfly-handle with two triggers for the operator.

The operator can move the head in any direction by rotating the butterfly handle. It can also be pulled back or pushed forward to some degree to mimic the realistic head movement of an actual dinosaur.

On the two-legged costumes, the head of the dinosaur can be raised up high, or lowered to near ground level. It is a bit like the movement of a sock puppet, only much more realistic.

The triggers on the handle are used to operate the eyes and the sounds the costume makes. The operator can make the dinosaur roar in several different ways. There are four standard roars, but it is possible to load more.

The eyes of the costumes blink, making it look alive. The operator has to pull the trigger button to make the dinosaur blink, so they can control the timing.

Operating one of these costumes is a lot like puppetry. It takes a skilled operator to make the dinosaur move and behave like a living animal.

Whichever type you choose, these costumes are a lot of fun. They can be used for kid’s parties or live performances. You could even use one in a parade.

Check them out for yourself. They need to be seen to be believed.