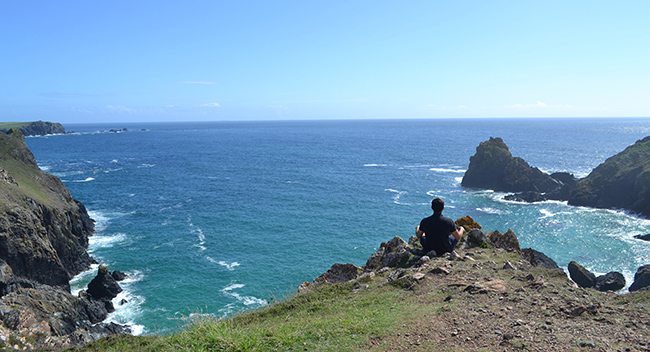 A few weeks ago I took a last minute trip to Cornwall with the family. I stayed at a place near Kynance Cove that had a spectacular cliff edge where I went to have some reflective time.

There was nothing in front of me but the ocean, and I started to think about my businesses, asking why we were on a certain track, and questioning a lot of what I had accepted as standard practice. I came out of my ‘cliff edge moment’ immersed with ideas.

Maybe it’s the four walls or the comments from the naysayers but our office environments seem to constrain innovative thinking. It’s no coincidence that some of the best business minds take time out for refection.

Bill Gates is known to take two ‘think weeks’ a year in a remote cottage, and refuses to take telephone calls for the duration. And Jack Welch of General Electric used to have one hour of ‘looking out the window time’ every day. This was not seen as a rest but valuable thinking time, which helped them to develop ideas for their business.

I keep telling my business partners that the top entrepreneurs are ‘architects of ideas’ and you have to find a way to unlock your creative potential. But most management teams still restrict thinking time by ‘scheduling themselves to death’, believing it’s what they need to do to be productive.

As someone looking at businesses aerially, my view on time management is different. When I came back from Cornwall, I advised one of my partners to stick to the tasks that added the most value and delegate the rest. Don’t worry about hurting people’s feelings because you haven’t replied to a certain email. Instead of trying to do everything yourself think about whether it’s going to lead to wealth creation. It’s very easy to destroy time in meetings or by getting caught up doing things that aren’t adding any real value.

Steve Jobs “the billion dollar hippy” and Bill Gates both grew up in the 60s when there was a rebellious ‘counterculture’ that brewed from a number of different movements, including the Civil Rights Movement and the Anti-War Movement. Back then challenging the status quo was the done thing. Young people growing up in that era broke boundaries scientifically, academically, and in the business world.

Jobs had such a strong ‘challenger mindset’ that his colleagues used to say that he was surrounded by a “reality distortion field”. He was able to ignore the boundaries set by the world around him and think limitlessly. This enabled him to innovate and inspired his team to work harder than the competition. It was that disregard for what was perceived possible which led to the creation of a revolutionary product like the Macintosh in 1984.

Perhaps the environment back then lent itself to out-of-box thinking in a way that is less ingrained in society today. We now live in a more stable environment, and that’s bound to create a stable mindset where people march behind one another as ‘corporate drones’ instead of stopping to ask “why”.

If people today don’t have the ‘challenger mindset’ in their DNA, maybe it’s time to create it if you want your business to innovate and become an industry leader.

In my view, founders and management should embrace challengers throughout every level of their organisation. They should encourage people to question things and challenge the naysayers that cling to the status quo. They shouldn’t let their egos get in the way; the most enlightened founders are those that are prepared to be challenged by their teams. It’s that type of mindset that will encourage people to break new ground.

There’s an excellent article that I read in The Economist called “In praise of laziness”. It offers a contrarian view about how time should be managed and questions the conventional view that employees need to work harder than everyone else to succeed. After my ‘cliff edge moment’ I’m beginning to think that ‘less is more’.

Free time for management teams, founders and workers could actually add more value if it’s used for ‘ideating’, i.e. doing something that helps you to come up with ideas. In my opinion, if we work people too hard they won’t have time to think and question what’s going on around them, and we’re going to lose the ability to innovate.

We should instead be trying to implant the Steve Jobs “reality distortion field” into people.
So – I’ll be telling my business partners to “go and have a cliff edge moment”. Spend more time working outside the office; there’s no point in making appearances just to be seen as being productive. Who’s to say that we can’t do more out of the office? I’ve had some of my best ideas while taking a stroll in the park.

In fact, the most successful business I’ve founded was conceptualised around a restaurant table, and one of the best documents I’ve produced was written on a transatlantic flight. You’re far more likely to have an epiphany if you get out of the office environment and expose yourself to things that are not part of your everyday life. Think of Sir Isaac Newton and the apple falling from the tree.

Running a business can be an overwhelming experience; there are so many things to do. 70 per cent of the time you’re told that something can’t be done, and it creates a sense of rejection in the office that dampens innovative thinking. Visionaries like Steve Jobs had a natural enlightenment that seemed to counteract this by distorting reality.

We can’t all be like “the legend” but maybe we can change the way we work to boost our ‘challenger mindset’. So – if you’re aspiring to become a ‘game changer’ with a boundary-shifting vision for your sector – I would suggest you go and have your own ‘cliff edge moment’.

Faisal Butt is Co-founder and Managing Director of Spire Ventures, a venture capital firm chaired by James Caan that invests in entrepreneurs with property related businesses. He is a former winner of Shell Livewire’s "Young Entrepreneur of the Year" and holds an MBA with Distinction from Oxford University
View all posts

Faisal Butt is Co-founder and Managing Director of Spire Ventures, a venture capital firm chaired by James Caan that invests in entrepreneurs with property related businesses. He is a former winner of Shell Livewire’s "Young Entrepreneur of the Year" and holds an MBA with Distinction from Oxford University