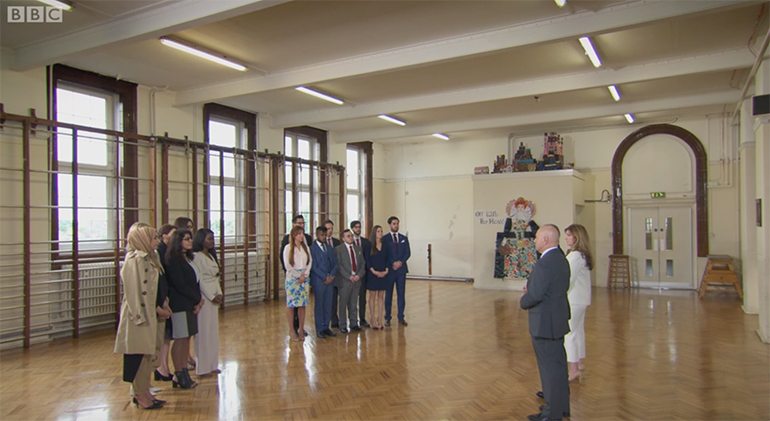 It’s week five and there are 14 apprentices, or should I say quivering wrecks, left vying for the exciting opportunity of working with septuagenarian Sugar.

A quickie by Lord Sugar’s standards, the 12-hour race to buy nine celebratory items that illustrated Sugar’s success seemed simple – but somehow the hapless hopefuls seemed to make rather a hash of it.
Before they set out, they balanced out the teams. Sugar moved James to Graphene, granting his wish; as well as the wishes one of the girls, who had announced around 5am that, “We need one or two boys to break up all the arguing and get us on track.” Ladies, you really are your own worst enemy #feminism
Joanne’s poisoned team leader chalice, courtesy of Sugar’s week four decision, was a fait accompli but Sajan volunteered for the project leader post, (and won over Charles), obviously not realising at the time that it would certainly transpire into a thankless task.

This straightforward project should have been a trouble-free task, given the nature of the nine items that Sugar wanted the contestants to source – a birthday cake, monogrammed handkerchief, 100 bricks, a Tottenham scarf, an Amstrad computer, a car aerial, plus items from 1947; and perhaps the only slightly more complicated requests were a scarlet doeskin (fabric use to make House of Lords attire) and 70 pieces of Rugelach (Jewish pastry); and these were only complicated because few people chose to find out what they were.

I think I must be unaware of the rules of the Apprentice because I just can’t understand how some of the unbelievably undemanding stuff continues to be delivered with such incompetence. For example, why would everyone jump into their transport and head off without having some sort of plan about where they were going? Is Google banned? If so, is asking pertinent questions off limits too?

Surely surviving without Google, but with the yellow pages, is perfectly possible, but the contestants seemed to be primarily using the directory as a lap warmer and ignoring its value as an information resource. Why not look up fabric shops, Jewish bakers, builders’ merchants and so on, all in the same rough geographical area – ideally nearer to the finish line (at the House of Commons) than not? The whole half day seemed chaotic, lurching from one item to the next, without about as much of a plan as are apparent in our current Brexit negotiations. Perhaps it was the editing, perhaps it wasn’t, but whatever happened, it certainly didn’t seem there was much precision to either team’s purchases.

Although split into two sub teams, both Vitality and Graphene, continued to flounder and it looked like the fines that could be imposed by Sugar – for failing to find what was required and for turning up late – were looming larger by the minute. Vitality bounded to the final meeting spot with just seconds to spare, and I have to admit to being quite excited to see if they made it; and hurrah!; a success. But wait, they’d arrived without three core items.

The higher the cost of the item, the higher the fine; not a fact that boded well for the (mainly) boys. I’d like to say Graphene galloped back to the finish line, but they didn’t. More meandered, or perhaps hobbled. With a larger proportion of the desired gifts than Vitality, the Graphene (mainly) Girls finally fell over the finish 45 minutes tardy, and paid for it with a fine of £100. But it was the Boardroom that we were all really waiting for…

Sugar slammed everybody’s logistics, I couldn’t fault him if I wanted to; and I really wanted to; but there’s no denying it, it was atrocious. So much so, Sugar found several ways to share his displeasure “sat nav gone nuts; magical mystery tour;” and at least one more. Next week is developing and delivering a tour around Bruges, who knows if any of them will make it round alive? But back to the Boardroom, and the profits are in.

Despite profits plummeting courtesy of the £s of late penalty, Graphene win again; Vitality thwarted by the Amstrad they almost brought but didn’t. Joanne celebrated by shedding more than a few tears before they left but it was the boys that should have been weeping. Clocking up another loss, poor Sajan tried to communicate his viewpoint but failed, at one point saying he was “here to be mental”. I think that he was trying to express that he was thinking about the tasks, it’s just the panic had taken over. So as Sajan sank, Sugar turned the heat up on Harrison noting he “wasn’t impressed at all” and suggesting Harrison was all talk and no action. But it was Sugar’s approach to Ross that was the most interesting.

Sugar gave Ross some stick about his claim to be the most intelligent person in any room and suggested that he may not have been built for business, but he did “respectfully” propose he was a “fish out of water” and I think despite his words, Sugar had a soft spot for Ross, or perhaps his business plan. Ross fought Sugar though outlining his impressive IQ but Ross was soon banished from the Boardroom, but in a far more balanced fashion than most. Sugar not only conceded it, “maybe unfair” but it was also an uncharacteristically gentle dismissal, even with a seemingly sincere wish of “Good Luck” from Sugar as Ross left; Ross bowed out gracefully too, thanking Sugar for the opportunity.

Whilst Graphene were celebrating in a 1940s style bar, Sajan and Harrison arrived back at the house to cheers. Having only completed week five, I’m sure the road looks very long from where the Apprentices are sitting and I think a somewhat shattered looking Sajan was right when he sat down, signed and said, “There’s another five tasks to go, you’d better pull up your socks kids.”