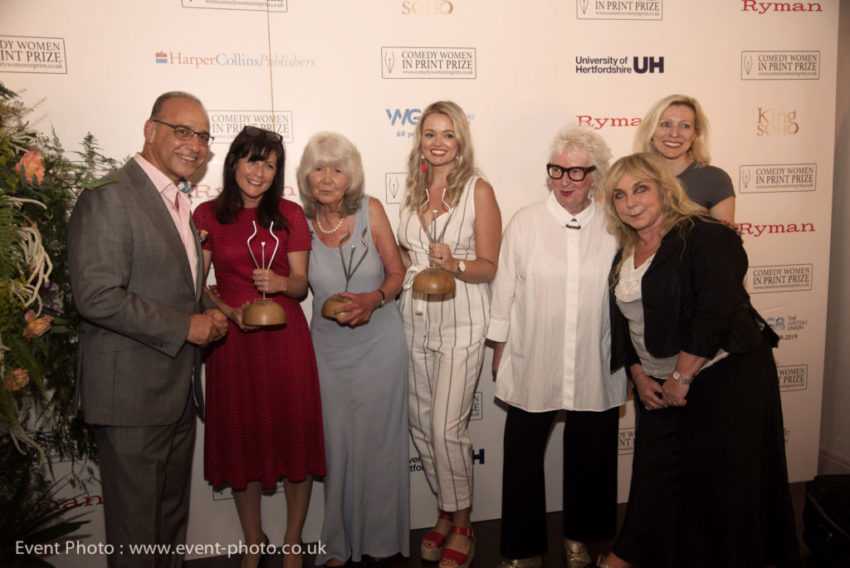 10 July 2019, I found myself on a podium proudly sponsoring and presenting the inaugural Published Prize for the Comedy Women In Print Awards (CWIP), brainchild of the absolutely fabulous actress, author and stand-up Helen Lederer.

As I stood before a room packed with beautiful, creative & talented women, all there to support & encourage each other onto greater things I was truly inspired and just a little bit in awe. I heard stories about scripts & books being written, campaigns to bring awareness to female Issues which nobody wants to talk about.

Books, you might say were my first love. As a child growing up in a large, busy and extremely noisy world I was often to be found under my duvet reading a book. Then I discovered boys, business and gin in that order. And my passion for gin, you might say, following the somewhat clichéd rules on ‘the circle of life’ brought me back to my first love books.

The road that led me to CWIP started in the King of Soho Winter Gin Palace. Nestled in a side street in London’s creative heart, Soho, Helen and I were simply catching up over a pink gin and tonic. As she started to tell me about CWIP and her vision to delight, empower and bring recognition to funny women writers my heartfelt reaction was ‘how can I help, what do you need?’.

Having spent the last 7 years building my own business I understand the tenacity, commitment & sacrifices needed to turn ‘that’ creative vision into a reality. And as fate would have it, having achieved some entrepreneurial success of my own, I found myself in the wonderful position where I was able to put pen to paper and sign five cheques for the winning group of very talented female authors.

My business pledged the prize money, oodles of pink gin, love and support. After all as women if we don’t support each other then what’s the point.

Saying that when chatting to me the statistics were in Helen’s favour on this one, apparently 64% of donations are made by women. Studies show that women entrepreneurs are more likely to ‘give back’ than their male counterparts.

Typically, female entrepreneurs have to start businesses with only half as much capital as men, so perhaps the reason for giving back is empathetic because we have to fight so much harder in the first place.

Sometimes it is difficult to focus on the positives in my own industry, skipping past the male bias as a way to downgrade it, in the hope that ‘if you say it often enough, it makes it so’. Only last month I sat in the audience at an industry event and was subjected to an all male discussion panel using the term ‘me too’ completely out of context.

Hey guys, it was really not funny – ‘#MeToo’ is a watershed moment in the ‘women’s movement’ and there was not one woman in the audience who did not cringe.

In recent times we have witnessed a positive societal shift and Helen by successfully bringing CWIP to life is one of the pioneers; she started working on CWIP about five years ago – which is a reminder to all of us that whether it be about change or ventures these things do take time and in the words of Helen she became “compulsive, obsessed, persistent and annoying – so I just cracked on with it”.

A century or so ago my great grandmother, Edith Bailes, was shunned by her own family due to her success in business and even my entrepreneurial mother didn’t talk about it until a couple of years ago; generations later it was still a family taboo. Yes, we have moved on from those times but the reality is that we are not quite there yet………

Outside this warm circle of funny literary and stand-up females the attitude I met was ‘the same old same old’. Credit from media partners and the like, was first and foremost given to ‘the men in grey suits’. I had to fight to be recognised for my contribution as both sponsor of the published prize and as a bonafide female entrepreneur

The errors came in and we fought tooth & nail to correct them, to be heard – Theo Paphitis we love you, but you didn’t sponsor all the prizes! Theo (of Ryman) as another prize sponsor was feted and commended and I was left in the shadows by men and women alike – I had even put a grey dress on for the occasion!

Helen’s motivation in establishing these awards was that comedy prizes ‘tend to go to men simply because they are men’ – the irony here should not be lost. I could have run down Conduit Street naked it wouldn’t have made any difference. Seriously though, this is not the first time I have found myself in this particular situation and it’s no laughing matter……. they do say progress is a long road! But how long?

I would like to think that so long as women like me continue to ‘walk the talk’ by supporting and inspiring all women to follow their dreams then perhaps one day the woman in the grey dress will prevail.

Alex Robson is the co-founder of West End Drinks Ltd, and brand owner and co-creator of the King of Soho Gin.
View all posts

Alex Robson is the co-founder of West End Drinks Ltd, and brand owner and co-creator of the King of Soho Gin.