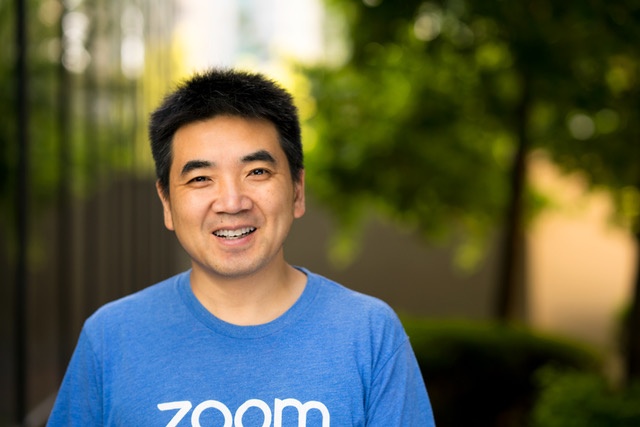 I am the founder and CEO of Zoom Video Communications. I focus on making sure our customers and our employees are happy every day.

My inspiration was to build a video conferencing solution that people love and this has been a long-time passion of mine. I was born in mainland China and I first envisioned Zoom while I was a college student there in the late ‘80s, and it would take over 10-hours (each way) by train to visit my girlfriend. My desire for an easier way to see her face-to-face without the arduous travel became the impetus for my long path from student to entrepreneur.

In 1997, I immigrated to San Jose, CA and secured an engineering position as one of the founding engineers at a small start-up, called WebEx. I stayed with WebEx for the next 14 years, and proudly grew the team I managed from 10 engineers to more than 800 worldwide, and contributed to revenue growth from $0 to more than $800M. When speaking with WebEx customers, I realized that the solution suffered from some deep flaws due to its older architecture, particularly a lack of usability, reliability and video quality. Simply put: it was hard to use and it didn’t work. I knew that Cisco needed to rebuild WebEx from the ground up – from the back-end architecture to the user interface to the sales model.

I told Cisco leadership, but they didn’t listen. I struck out on my own in 2011, and, fortunately, dozens of WebEx’s most talented and visionary engineers soon joined me. Together, we spent the next two years building Zoom 1.0, a unified video and web conferencing software solution that ran seamlessly across mobile, desktop devices and conference room systems. Since then, we’ve developed the product into the best video communications software in the world and built a global team of over 850 passionate people.

My way of doing business is all about creating happiness on your journey. If your employees are just working toward some goal in the distant future, every day between now and then will be a slog, and they won’t care about the seemingly little things that have a big impact on the customer experience. I stay focused on making my customer and employees happy on a day-to-day basis, whether it’s by responding to an email quickly, sending a gift or flowers, publicly acknowledging someone who has done a great job, following up with someone about a concern they had, and so forth.

I really admire the former CEO of Walmart, H. Lee Scott. I even wrote an appreciation of some of his words of wisdom recently. His point of view has greatly affected my management style.

Looking back, is there anything you would of done differently?

I would have started Zoom earlier. There has been so much dissatisfaction in the communications market for so long, that it has been ripe for disruptors like Zoom.

For an entrepreneur, I would say just go for it! Don’t let someone else have your dream, just get started! And for anyone starting out in their job, I would say that just because you’re out of school, it doesn’t mean you should stop learning. Read everything you can, take online courses, find mentors. Lifelong learning is one of the most important keys to success.