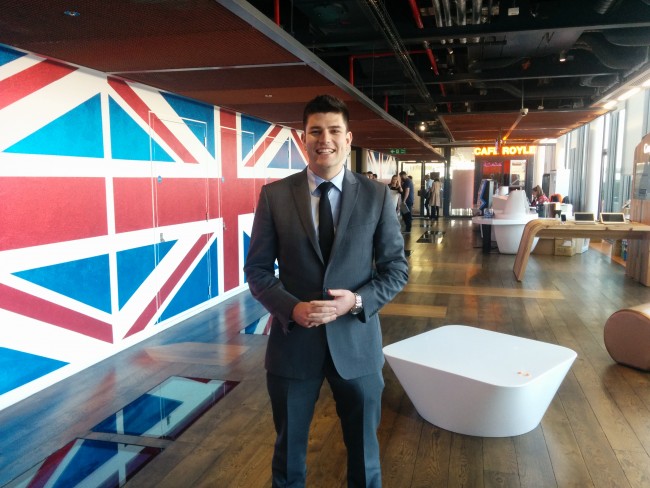 Most of the UK have watched the apprentice at some point in fact we write a column on it every week!

So when the opportunity arose to interview a previous winner we couldn’t resist finding out what had become of them in their business life once the cameras stopped rolling.

Mark Wright, the winner of the Apprentice is 2014, bagged himself Lord Sugar as his business partner along with a quarter million pound investment. Being the cynical soul that I am I couldn’t help but wonder just how involved Lord Sugar gets with the business.

Speaking of his new business partner Wright said: “He’s a very good mentor and a lot more involved personally than I thought he would be. I thought that once I’d won he would just put a team of people around me.

“Especially at the beginning he was emailing and calling me every day and still I see him once a month for a full day. Even though we are nearly 12 months on and I might talk to him probably every other day. Whilst the £250,000 was very important to get a premises and to get started it’s actually been the mentorship that has been the best part about it.”

And what about this years cohort of candidates “ Truth be told there is a big difference between people on the programme and what they are like in real life. I think some people get a rough deal, but there are also those that try to be something that they are not and that gets picked up on too. Also the fame can get to people, 2 minutes of fame and people become disasters.” Wright said

Climb-online has been running for just under 12 months but Mark has already set records being the fastest growing company to come out of the show. Customers have spent over £1 million with Google alone.

“We are working in an ethical way. Our industry has a reputation for doing things in an unethical way and working in the dark or shadows. We approach it differently, we sort the clients website out and teach businesses how to approach things properly and we make it affordable.

“We have around 170 customers. They spend anything from £500 a month to £800k a month on adwords. All of that said our average customer is generally an SME with 5-20 staff, who spends around £1500 pounds a month on advertising.“

Winning the apprentice is obviously a great leg up at getting a business into the public eye but I’m also keen to find out what exactly sets Climb-online apart from the many other businesses doing the same thing.

Wright enthuses: “It’s a personal service. I came from a huge agency in the city that were losing customers hand over fist, purely because they weren’t looking after them. With Climb-online I know all of our customers, whatever the size of the business, they meet me, they get a call from me. They all have a dedicated account manager that goes out once a month to see them.

“In terms of technology we have the highest level of partnership with Google in the country, one that only 6 agencies in the world can claim the right to this privilege.

“The CEO of google was at the final of The Apprentice and watched me give a pitch, after which he told Lord Sugar that if he didn’t hire me then he would. As soon as I won Lord Sugar and I arranged a meeting with Google and we said that we still wanted to work with you.

“I was probably one of the first SEO or PPC people to really ever go onto TV and Google saw it as an opportunity and decided to help us. “

The investment from Lord Sugar was a huge help when it came to the process of hiring staff it seems. With hires that previously worked for Unilever, Dyson and British Gas Wright has a good team on board. “We are working with people that have managed some of the biggest advertising campaigns in the world. That’s a massive bonus for us.”

So what has Wright learnt from his first year in business? “It’s hard! Whatever your background the first year is really hard. In a startup you’re creating processes and you make mistakes.

“Everything that is wrong will generally happen in the first year and you have to roll with the punches and you need to be resilient and be working at something that you enjoy. The dark days are tough and if you don’t enjoy what you’re doing then you’re not going to make it.

For more information on Mark and Climb-online check out Mark’s profile page or visit the Climb-online website.