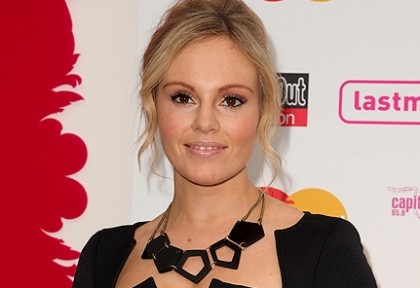 No sooner have I stepped foot through Michelle Dewberry’s front door I’m ordered to take off my shoes. Naturally, I abide and gingerly follow the 2006 Apprentice winner through her impeccably decorated apartment and into the lounge. Now I understand the ‘no shoes’ rule. This room, like the others, is kitted out art deco style, with loud, yet stylish, pink and black wallpaper. Surfaces are scattered with pictures of friends and family. Above, the book shelves are crammed with spare copies of her autobiography Anything is Possible, poetry books and business bibles.

Across the room, Dewberry nestles herself on a cream chaise longue, looking effortlessly chic in a black Diane von Furstenberg wrap dress. “When I got this chaise it was a real wreck,” she admits. “I had to re-cover it, put the legs on and I put all these studs at the arm,” she says proudly. Surprising that she has time for such DIY pursuits given the recent launch of her new venture, Chiconomise, but it’s good to see her practising what she preaches.

“Chiconomise is my baby,” she smiles, at the mere mention of the start-up. “I came up with the idea when I was living and working in New York last year. I was reading daily lifestyle email, Daily Candy and they suggested a fabulous hair salon to go to but it was $100. I asked myself if I’d be able to afford a $100 blow dry once a fortnight. Probably not. So I started thinking, ‘wouldn’t it be nice if I could have the blow dry at a discount’,” she recalls. And so Chiconomise was born. “I want to be able to keep up the nice lifestyle, but without it necessarily costing a lot of money.”

The timing of the project is no coincidence. Dewberry, known as the ‘Steel Pixie’ during her time on the BBC show, is tuning into the needs of an increasingly cost-conscious society. “I am massively aware of the current economic climate and while people are impacted and people are cautious about what they’re spending, girls will be girls and we want to look good, we want to feel good, we want to socialise: Chiconomise can help girls to do that.”

That said, the use of the Chiconomise portal needn’t only be limited to during the downturn, she says. “Chiconomise isn’t just for bargain hunters; it’s all about intelligent spending,” she explains. “The economic climate bears no relevance when it comes to intelligent spending. It’s about helping people get the best deals on whatever it is they want to buy, which I think is a sensible way of shopping.” And there is more to come – over the next 18 months Dewberry plans to put Chiconomise on the map as “the number on site for women to check out before they do anything. I see Chiconomise as becoming a crucial portal in the way women lead their lives.”

Dewberry is certainly passionate about her latest project, which is the most high-profile since she parted ways with Sir Alan after 11 months, a fact which is commonly misrepresented in the media. While the partnership wasn’t as long-term as many would have envisaged (she left for professional reasons after the project she was working on was deemed unviable and was subsequently shelved), the petite blonde says she learnt valuable lessons from her mentor. “Sir Alan Sugar taught me that the most important thing you can give yourself, and it is a gift to yourself, is self-confidence and self-belief,” she recalls. “Because when Sir Alan Sugar has an opinion, wild horses can’t drag him back from what he believes in. And that’s a very good trait,” she says emphatically.

Certainly, starting a business requires a large dose of self-confidence, as setting up in a recession is even more difficult – Chiconomise found itself homeless a couple of months ago after the landlords of their Covent Garden office went bust. Added to this, an initially tricky round of funding meant Dewberry had to take the decision to go it alone and fund the business herself. “I originally went for funding and I had to take the decision not to take the money on because of the amount of equity they wanted due to the economic climate,” she recollects. “I’m now seriously considering angel investment and I’m having some good solid meetings about that at the moment.” The business is currently making its money through affiliate deals and eventually revenue will be driven through advertising on the site. “Anyone who says setting up a business is easy is lying,” she admits. “But that’s part of the joy. I absolutely thrive on it.”

You can also watch a video interview with Michelle here