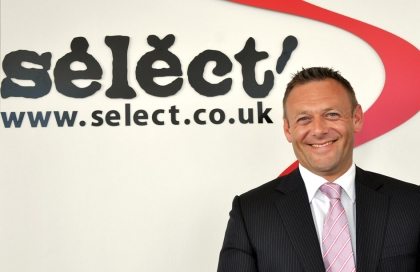 Well one local business man who owns franchises of the well known recruitment brands Select Appointments and Parkhouse Recruitment has done exactly that. With minimum qualifications Darren Leppard, Director of Select Appointments in Leicester and Coventry has gone from Warehouse Operative all the way to a Director of his own Recruitment Company. Not just content with being a Director Darren is moving towards entrepreneurship. As well as that he is looking to share his tips and his path to success and to give back to the cities that gave him the opportunities in the first place.

Darren started out by working as a Warehouse Operative and had always believed he could do better. His initial thought was that it would be difficult to get on without any qualifications. However his ambition got the best of him and he applied to several Recruitment agencies using his warehouse experience as a unique selling point. Although he was discriminated against by one or two companies, he was given the opportunity by one agency and went on to become an excellent recruiter.

“I was aware that I had a lot to learn but I knew that the recruitment industry was where I was supposed to be. In fact I enjoyed the fast paced lifestyle so much I never took the chance to sit back and reflect. All I knew was that I was enjoying it and wanted to become the best and I learned every detail I could about it.”

Darren continued to work his way up the ladder and he worked hard, so much so that he turned his expert skills to becoming a business developer and an Executive Manager, helping to improve the agency and bring in new business. Darren then set up his own Recruitment Company under the Select Appointments franchise because he felt he had learnt enough to know what clients and candidates deserved. He felt that he needed to set up his own company to project the standards that he knew would work to create a successful recruitment specialist company.

“When I thought about setting up on my own the thought was very daunting, a friend suggested the Select Appointments franchise, and the more I looked in to the idea the more I felt it was what I was looking for. Select franchise has given me the best of both worlds, the independence of my own agency with the back up of a larger company to support me.”

One of the hardest tasks was taking over an existing branch of Select in Leicester which had been around for 22 years, as no one seemed to have heard of it. Darren embarked upon an intensive strategy of promoting the brand in to the community through local opportunities and through networking. Through these proactive strategies both awareness’s of Select Appointments in Leicester and Coventry grew quiet rapidly.

However, that is not to say that there were no set backs along the way. When ever there were problems Darren often spoke to his good friend Matt Stockdale the Managing Director of Home Pride Ltd who as a successful business man himself would offer advice and mentor him throughout any difficulties “Matt is someone who is incredibly successful himself and is a great inspiration, he has given me some really useful advice over the last couple of years and has really helped me to get to where I am today. His advice is from his own experience, so he always knows what he is talking about.”

One of the other important parts of Darren’s life that definitely helped him to channel his drive and ambition was his love of sport. A keen Kick boxer when he was younger Darren was used to gruelling workouts and trained very hard to achieve goals. “Training has definitely helped me become very disciplined, and I believe it has had a positive influence in my life”

Although there were a few lows in Darren’s career there were a lot more highs. Within the first year of opening his own Select Appointments franchise, Darren won the ‘Franchisee of the year’ award; a tremendous achievement in his first year of trading. “Not only was this a great reward for me and my company but for the whole team, who won a trip to Rome, we had a great time!”

One of the most basic principles that Darren feels is important to him and that he has stood by through out his career and success is honesty. ‘Being honest has been the most important thing that we do. We ensure that we are honest not just with our clients, but with our candidates, acquaintances and team members. It is one of the reasons why I have got to where I am, because of honesty.’

“One of the most positive decisions I ever made was going forward with the Select Appointments franchise, I have never regretted it, not for a moment. I am glad I made the step to go forward. It has been a life changing decision but a good one and it goes to show you don’t always need straight A’s to be successful in life as there are other options.”