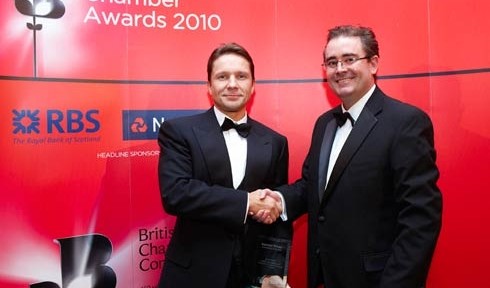 Simon Dolan, who was recently dubbed the ‘Twitter Dragon,’ was named UK Entrepreneur of the Year at the recent British Chambers of Commerce Chamber Awards 2010, beating competition from some of Britain’s most inspirational business personalities.

It has been a stand out year for the Buckinghamshire based businessman. His accountancy firm, SJD Accountancy, has gone from strength to strength, which has allowed him to invest his time and money in five start-up companies as well as winning his debut race in the Spa 24 hour with Aston Martin Jota Sport.

At the start of 2010, Dolan criticised the government and banks believing there was an ongoing lack of support for entrepreneurs and small businesses, particularly start-ups.

He therefore decided to take matters into his own hands, by offering entrepreneurs a unique investment opportunity, via Twitter. The premise was simple: Tweet Simon in 140 characters or less, and grab his attention. He quickly earned the nickname, ‘The Twitter Dragon.’

This has resulted in Dolan now investeing over £1 million in four fledgling companies, including an airline, a publication, an online music competition described as, ‘The antithesis to the X Factor,’ and a women’s lifestyle range.

Simon Dolan said, “It’s been a really exciting year, and the fantastic businesses that I have been speaking to and investing in over the past 12 months show that entrepreneurialism is alive and well in the UK. This award is a great honour and a fantastic end to the year.”

Entrepreneur of the Year
Simon Dolan

Business of the Year
Abriox Limited