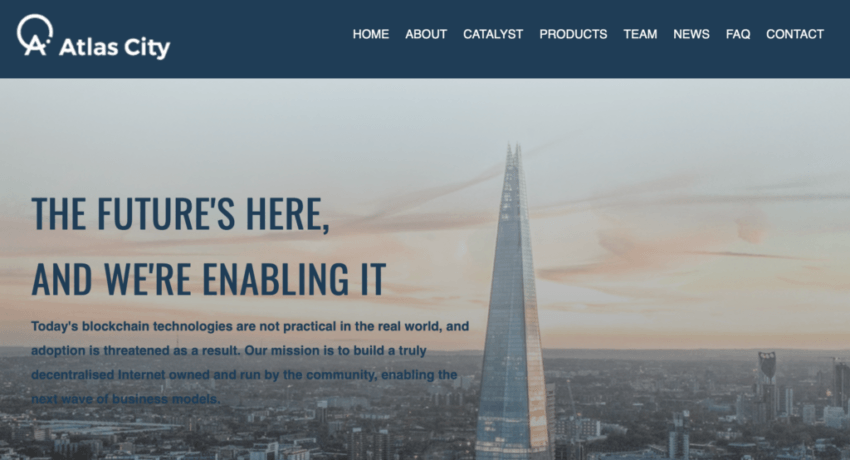 Atlas City Global has secured $4M in seed investment from Robert A Hefner III, along with other HNW individuals.

The funding will be used to complete Atlas City’s global decentralised web, and supports the final stage development of its Catalyst Network.  Catalyst is a full suite of new technologies enabling secure decentralised computing and data storage that will shape a new world of Web, IoT connectivity and the future of Industry, government and commerce.

Designed as an open source, fast, light, secure and scalable network, that is accessible to .Net developers – the largest developer community in the world.  Catalyst is set to launch in the second half of 2019.  Atlas City Global is currently running a number of proof-of-concept and pilot projects (see editors’ notes) on the Catalyst Network in the fields of supply chain, utilities, food provenance, plastics recycling, and the energy sector.

The current world of blockchain started with the promise of decentralisation, democracy and widespread efficient business uses; however, the technology has struggled with real-world problems.  Issues of cost, ability to scale and level of difficulty to build practical applications have stalled its widespread adoption by global business, commerce and governments.  The Catalyst Network has been built from scratch to solve these challenges.

The CEO and co-founder of Atlas City Global, Darren Oliveiro-Priestnall and members of the current team have evaluated these challenges surrounding the wider adoption of distributed ledger technology (DLT) and how it could be used outside of the crypto world.  One of the biggest challenges they found was that it was difficult to make the existing technology’s benefits relatable to industry, commerce and government needs.  Atlas City aim to solve these problems for the real world.

This funding will take Atlas City Global through to the upcoming launch, of a completely new, functional and decentralised technology suite, designed for performance, scalability and interoperability.  The lightweight architecture makes it possible to run a node on a range of IoT devices, delivering speed at scale without compromising on security. This game-changing technology will take the application possibilities for DLT to new levels, and in ways that previous blockchain technologies were never designed to do.

Atlas City Global has a 20+ strong team which includes prominent British financier Sir Mark Weinberg (full bio below), who will sit on the board as Chairman. Weinberg joins Founder and CEO Darren Oliveiro-Priestnall – a 20-year veteran in the software development and technology business industry whose qualifications include: certified blockchain professional (CBP), certified ethical hacker (CEH), and certified network defence architect (CNDA) as well as being a Chartered IT Professional (CITP) and Professional Member of the British Computer Society (MBCS).  Darren has worked on projects for Microsoft, the European Commission, BAE, Achilles, Deutsche Börse, Razorfish and Flix Innovations for movie studios.

The new Atlas City Global Chairman, Sir Mark Weinberg, said, “It is widely recognised that developments in technology – particularly Blockchain and Distributed Ledger Technology – will have a profound effect on the growth and profitability of a wide range of businesses. Having launched and developed a number of successful new businesses during my career, I am very pleased as Chairman of the Board to be guiding the Atlas City team in achieving their exciting vision.”

Darren Oliveiro-Priestnall, Atlas City Global CEO, said, “We are delighted to have someone of Sir Mark Weinberg`s calibre heading our Board as we move into this crucial phase of Catalyst`s development, and also to have secured this level of financing, which will further support our efforts to create a truly decentralised, stable and secure network that delivers in the real world. Unlike the more common approach to fund raising through token generation events, which raise money first and then often fail to go on to deliver technology, Atlas City is developing the technology first and launching a viable network with real products and services running before inviting the public to buy tokens. We are fully funding development to ensure users experience the benefits of the network, launching a fully viable mainnet on Day Zero. And once fully operational in 2020, we are committed to handing over governance to the broader community to amplify adoption and development of the network.”

Funding development of an active network

While Atlas City Global is funding the development of the Catalyst Network from seed investments, it will hold a Token Generation Event in the second half of 2019 to coincide with the opening of the network to the development community. Users will be able to experience the fully viable mainnet, before the end of the token sale. This differs from the usual model where users buy the promise of future utility. Instead, users will be buying decentralised compute and file storage on an already established and validated network making rapid development of the network possible.

Investor Robert A Hefner III said, ”I backed Atlas City Global because I believe in the dream and the abilities of our founder Darren Oliveiro-Priestnall.  Darren’s passion is to overcome the many problems of early blockchain technologies by starting from a clean slate and building a safe, more scalable, significantly faster, energy-efficient and easy to use distributed ledger technology.  I believe the Catalyst Network will begin to not only restore ownership of personal data, and intellectual property to the creators, but also facilitate a new wave of safe, innovative, efficient, and less-costly global commerce and communication solutions in ways barely imaginable today.”