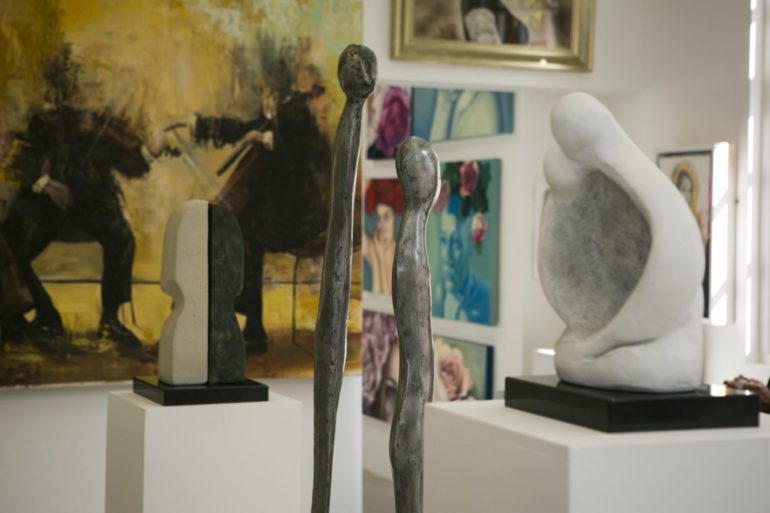 That painting you spotted in an antique shop for a tenner turns out to be worth thousands, or the ugly painting gifted to you by your grandmother and hidden in a cupboard ever since is actually worth a pile of money.

For one investor that dream has come true.

A painting of Christ believed to have been painted by Leonardo da Vinci has just sold for a record $450m (£341m).

Just under 60 years ago, the very same painting, then generally reckoned to be the work of a follower of Leonardo and not the work of Leonardo himself, sold at auction for a mere £45.

Even accounting for inflation that’s a pretty dramatic return on your investment.

So is investing in paintings a good way to get rich fast? And how should you invest in art?

“With extreme caution” is the advice of Patrick Connolly, a financial adviser at Chase de Vere.

He says while stories like the Leonardo painting make it seem attractive, such cases are relatively rare.

Connolly says Chase de Vere does not recommend their clients invest in art because the downsides outweigh the upsides.

“What you get back is based solely on supply and demand and there are big movements upwards or downwards if there are changes in the economic environment or if particular works or artists come in or out of fashion.”

An exception, he says is for very wealthy people who have a large array of investments and need to make sure they’re not too dependent on one particular sector.

As art has no correlation to the stock market, it means paintings can go up in value even when the market crashes, making it a good diversification for an investment portfolio.

To invest in art as a true investment, he suggests you need a starting fund of at least £5,000, and possibly up to £500,000, which can be used to buy individual works of art or invested in an art fund.

But it’s not just about having enough money to buy the painting in the first place. Any fund will charge management fees, and if you buy an expensive painting then doing the seemingly obvious thing of giving it pride of place on your wall could be a fast way to lose money.

Expensive works of art are often stored in protective boxes complete with detectors to monitor humidity and temperature levels, and to protect them from sun damage or other accidents such as a spilled cup of coffee.

And if you do put it on your wall then your insurance costs are likely to be high, warns Mr Connolly.

“If word gets out that you have expensive art hanging on your wall then you’re likely to be a target for burglars,” he says.

Art is also not a regulated investment so when things go wrong – for example, an artwork turns out to be a fraud – then investors are on their own and cannot fall back on regulation for any compensation.

“So what you get is an asset which is unregulated and illiquid, with potentially high costs, volatile performance and that produces no income. This isn’t exactly attractive to most investors,” says Mr Connolly.

Studies also suggest that the average return on art investments is rather less spectacular than those of the Leonardo painting owner.

A recent academic study, based on examining data from 1.2 million auction house sales of paintings, drawings and prints, concluded that art appreciated in value by a modest 3.97% per year, in real US dollar terms, between 1957 and 2007.

Of course given the current environment of low interest rates, that’s still a better return than many savings accounts will give you.

Yet you don’t necessarily have to be wealthy to invest in art.

There are a growing number of art fairs and online marketplaces aimed at buyers with a more modest budget.

The Affordable Art Fair (AAF), which started out in London’s Battersea Park in 1999, now holds fairs in more than 10 cities around the world. While prices can be as high as £5,000 for a single painting, the AAF’s average selling price in the UK is £600.

Founder Will Ramsay said the motivation behind the business was to prove that “you don’t need to be a squillionaire to buy art”.

There is also Flux Exhibition, hosted by Chelsea College of Arts in London and curated by Lisa Gray which brings 90 of the best emerging and established artists together for a five-day interactive event.

Gray has a degree in Business and Economics and an 18 year career as an analyst and so was able to bring together her business mind and love of art to create successful exhibitions and projects for all artists involved.

Most art industry experts suggest that you buy a piece of art because you like it, not because you want to get rich.

Private equity company founder and art investor Richard Alvin said: “The most sensible approach is probably to buy something they like and can afford and, first and foremost, be prepared to keep it just for their own pleasure.”

“If it goes up in value that should be just an added bonus.”