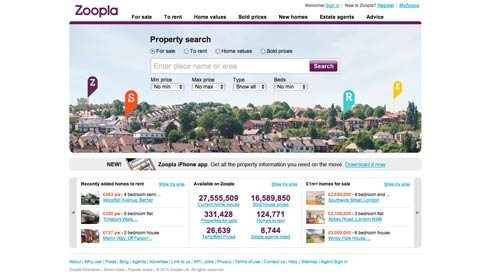 The funding package consists of £1.75 million of new equity finance from existing shareholders, led by venture capital firms Atlas Venture and Octopus, together with a £1.5 million debt facility from Silicon Valley Bank, the commercial banking division of SVB Financial Group.
Launched less than three years ago, Zoopla has already overtaken a number of long-established players to become one of the UK’s top three property websites.
So far Zoopla has used previous funding to acquire a litany of ailing competitors including OnOneMap.com, DotHomes.com, Extate.com and the PropertyFinder Group. Gunning to become to become one of the UK’s top property websites, it’s now on 5 million visitors per month.
This latest round of funding will be used to invest further in marketing to drive Zoopla’s brand awareness and grow its market share.
Zoopla launched its first national TV advertising campaign earlier this year and will return to the small screen in January with a further campaign across ITV, Channel 4, Channel 5 and the Sky digital channels.
Alex Chesterman, Founder & CEO of Zoopla, commented: “Despite the current market uncertainty, we are totally committed to supporting the industry and building Zoopla into the leading online property destination in the UK. As a result of our innovative features and exclusive partnerships, we provide unique and unrivalled exposure for our agent and developer members and will continue to invest whatever it takes to ensure that Zoopla is their most effective online marketing partner.”
Alex Macpherson, Head of Ventures at Octopus Investments added: “ Zoopla has developed a very compelling proposition which is why it has continuously been the fastest growing property website in the UK since its launch. It is led by a highly seasoned team with whom Octopus has a longstanding relationship and are delighted to be supporting.”