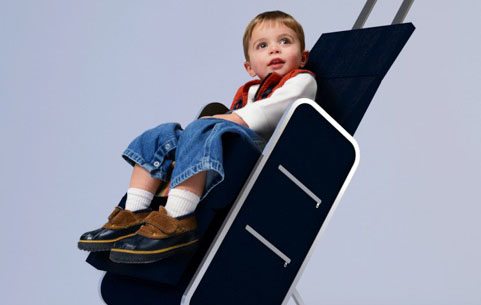 Husband and wife team Tom and Tamar Clarke have raised more than £30,000 on Angels Den to prototype and test the BAGRIDER as the first stage of their plan to bring it to market. Eight funders have invested £30,600 so far, and there are still 56 days of the campaign left to run.

“It’s been amazing,” said Tamar Clarke. “Crowdfunding was our first choice for our first round of fundraising – it gets BAGRIDER out there and we get like-minded investors on board.

“We had our eyes opened to crowdfunding by the Angels Den team, and it just fitted perfectly with an early stage business that wants to get noticed.” 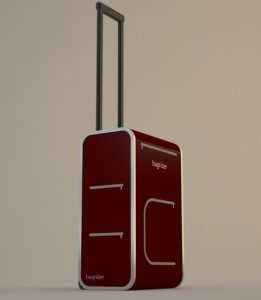 The couple, who both have experience in aviation, were astonished that there was nothing that properly helped parents travel through airports with infants and toddlers – a challenge they experienced firsthand with their first daughter.

BAGRIDER was the solution, essentially a cabin bag that quickly transforms into a secure travelling seat for infants that could be wheeled all the way to the aircraft seat and complies with strict sizes for onboard luggage.

“Travelling through airports can be stressful for parents at the best of times. You will probably have a pram which may be taken off you at check-in or if you’re allowed through the terminal it will significantly increase the time spent at security… unpacking, folding, scanning and reassembling,” said Tamar.

“And with the current aviation threats this will not change in the foreseeable future. Even more of an inconvenience is the fact that the buggy will be taken from you at the aircraft door and more than likely the next time you’ll be reunited with it will be at the over-sized baggage reclaim. This means carrying tired young children on often long walks through the terminal.”

A major high street retailer has already shown an interest in the new product, and the duo will present BAGRIDER to a major airline with a view to selling it in their new duty free home delivery service.

The potential market for BAGRIDER is significant: between 1.5 and 2 million passengers travelled with at least one infant (defined as age 2 and under) through UK airports in 2012 and their target market is parents with children between 6 months and approx.4yrs. And that’s just the UK – when you extrapolate to a global market the numbers are, say the Clarkes, “immense”.

Unlike other products on the market, which the Clarkes consider to be “toys”, BAGRIDER provides a safe mode of transport – they believe there is nothing on the market that addresses this problem.

Bill Morrow, founder and CEO of Angels Den, said: “BAGRIDER is a perfect example of the power of our new crowdfunding platform: we met them on the 6th November when they didn’t have a business plan, pitch video or even know what crowdfunding was. Five weeks later they’re fully funded and with some great investors who are already working on taking the company forward.

“It’s a fantastic success and to be honest, even we were surprised that it was fully funded in less than 48 hours of going live.”