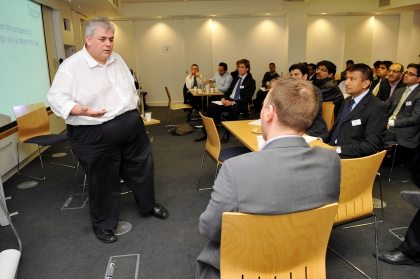 He claims sellers and buyers are hiding behind the economic downturn as an excuse for plummeting orders, longer sales cycles, deal slippage, spending freezes and appalling close rates.
During a 90-minute interactive training session at Cass Business School at the London School of Economics he revealed some golden Rules to the audience of entrepreneurs and academics.

Mr Cauchi was speaking to members of The Indus Entrepreneurs (TiE), a non-profit networking organisation for entrepreneurs and professionals.

He said: “Most salespeople who say it is harder to get business in the recession are playing the victim.

“If you have the skill to uncover why the ultimate decision maker really wants the product or service you are selling, and you help them become emotionally engaged enough to find the will to have it, then businesses will find the money to buy it from somewhere.

“Money is never the issue in a selling situation.

“Customers are out there and if they are not buying from your business they will be buying from somebody else.

“Order takers who’ve had it easy over the last 10 years are dying on their feet. They never had the right to call themselves salespeople.

“Selling is a full-contact blood sport. Real salespeople need to have guts and humour to be successful – they are two key characteristics for anyone who wants to sell.”

Christine Spooner, director of TiE UK said: “The evening went very well and the feedback I got off members who attended was great.

“Marcus gave us a fascinating insight into the psychology of sales.”

The 41-year-old salesman follows the 49 Sandler Rules to selling which have now been published in a guide that’s set to become the new bible for sales staff across the UK.

It has already been a huge hit in the States, making the Wall Street Journal’s bestseller list and landing at the number one position on Amazon’s list of sales books, the week before the book ’s official release date.

The Rules dismiss traditional selling techniques and reveal for the first time the sales secrets of the world’s biggest sales training company.

Mr Cauchi has his own favourite rules that have reaped rewards for his clients.

He said: “The Rules are all important but it is fantastic to see clients do well in business as a result of an individual rule.

“One of my favourites is “Learn to fail to win” which is about learning from your mistakes and accepting failure as part of business.

“One client is a telemarketing company that implemented this by making all members of staff write down three lessons they had learnt by the end of every working day.

“They would then share them with their team so the company learned from and saved these lessons to help avoid them in future.

“Documenting and saving this intellectual property to the business has added value both by improving performance and increasing the value of her asset when she comes to exit with a trade sale in future.

“Another favourite rule of mine is ‘Sell today, educate tomorrow’ which means that you shouldn’t give away free consulting by telling your prospective clients what you can do, you should ask what it is they need from you.

“One of my clients is a web design company and they found they were spending thousands on proposals for potential clients.

“At their next opportunity I taught them how to cold call on to an advanced tender process with a local authority.

“I advised them not to write a proposal, not to give away their ideas, not to share their confidential pricing, and not to show examples of their work.

“Instead I got them to negotiate “last look” which meant the other 4 firms did the free consulting.

“My client quoted at five times more than the next highest bid and won.”

Entrepreneur Magazine has ranked Sandler Training as the No. 1 training franchise seven times since 1994.