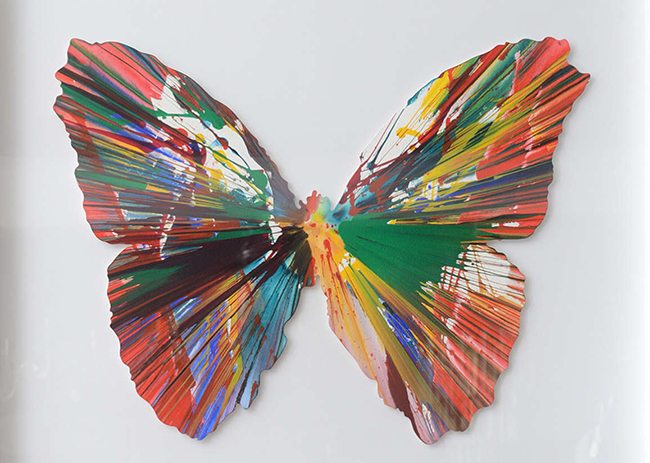 We are a nation of house-buyers, with Brits desperate to put their money in bricks and mortar.

However with mortgages harder to come by people are seeking out alternative options. If you have some collateral, that doesn’t mean you shouldn’t invest.

I may have a solution for you – dealing in modern art and vintage late twentieth-century furniture.

You may think this is the reserve of the posh and rich. But, as a one-time working-class lad from East London, I can tell you it absolutely is not.

Starting off as a clerk at Sotheby’s at the age of 17, I left at 24 to start my own business, and now own a large gallery called Decoratum in London’s trendy Marylebone.

I live in the prettiest square in a very fashionable part of North London, and count Kate Moss, George Michael and Jude Law among my neighbours.

Now I’m going to let you in on the secret of how you can do the same….

*YOU WILL NEED SOME MONEY

I’m not going to kid you – it’s tricky for somebody without a decent sum of money to get on the art-dealing ladder.

Anyone can do very well buying and selling modern art and modern/vintage furniture if given good advice.

It’s vital you get to know the main players, and one way is to regularly visit dealers.

I don’t know any major dealer who wouldn’t be delighted to give advice to a potential customer. Their advice is invaluable in getting onto the first rung of the dealing ladder. However, stick to galleries with a reputation…

If you want to get into dealing, go to as many exhibitions and auctions as you can and take in the atmosphere.

The best are at Sotheby’s Christie’s, Bonhams and Phillips, and their main glitzy evening sales are held a couple of times a year. You will see some pieces sell for £100 million or more and you’ll be hooked.

*DON’T RUSH INTO ANYTHING

Very few people buy on the first night of exhibitions. In my experience, serious punters have often already been. So ask for a preview of the exhibition, instead.

If it’s serious investment you want, buy from galleries that have been around years – such as Gimpel Fils, or Marlborough Fine Art – who used to look after Freud, and now look after Anthony Gormley, and other huge names.

They are run by serious academics, which museums latch onto quickly, and promote their artists – unlike high-street galleries, where the artists on sale are the celebrity equivalent of Z-listers.

Check out art from other countries, not just England. Chinese art is going to get bigger and bigger. Also, art from the Middle East is a good buy.

*REMEMBER THE RISK OF ‘CONTEMPORARY’ ART

While you can make a fortune dealing modern art, you can lose it in an instant if you don’t buy at the right price.

Remember, the word ‘contemporary’ is made up of two words…
Con: Art dealers will hype something – but if there’s too much hype… keep away.
Temporary: Today’s flavour of the month is very quickly tomorrow’s garbage.

The stuff may look nice on the wall, and be cheaper than wallpaper, but it very rarely goes up in value unless by a big name.

Better to have a poor painting by a well-known artist than a great painting by someone you never heard of. But make sure you like it…

Buying purely as an investment rarely turns into an investment. If you buy something that you 95 per cent love, and 5 per cent for investment, then more often than not you will be onto a winner.

Don’t be fooled into thinking you will buy art cheaper at auction than you will from a dealer. It’s a fallacy.

Dealers love auctions. We are very careful what we buy and need good stock in our galleries. But when we get bored with a great painting that hasn’t sold in ages, off to the auction it goes!

*IF YOU MUST BUY AT AUCTION, GET AN INDEPENDENT EXPERT

If you do see something that interests you at auction, don’t be afraid to ask a dealer to buy for you. People get carried away at auction and it’s their job not to let you overpay. Yes, they charge 5 per cent, but their advice and knowledge pales this into insignificance.

*AND REMEMBER THE ADDED COSTS

It’s easy to forget that you have to pay a so-called ‘hammer premium’ (like a service charge) on top to the auctioneer of around 20 per cent. I have seen people forget… and get badly stung.

1) A decanter I bought 40 years ago in a very expensive shop in the Burlington Arcade for £60 and sold at auction £460. I know this doesn’t seem a lot but shows it’s often more profitable to go to expensive shops where goods are already restored rather than buying something cheap and having to do the restorations yourself.

Jeff Salmon, is a consummate deal maker, negotiator and entrepreneur. Whilst coming to prominence as a gallery owner and dealer on Channel 4's 4 Rooms he also has a diverse mixture of companies which include the UK's best known air conditioning company, an Insurance Loss Adjusting/Assessing company, a Complementary Health Practice and a company selling wheelchair ramps.
View all posts

Jeff Salmon, is a consummate deal maker, negotiator and entrepreneur. Whilst coming to prominence as a gallery owner and dealer on Channel 4's 4 Rooms he also has a diverse mixture of companies which include the UK's best known air conditioning company, an Insurance Loss Adjusting/Assessing company, a Complementary Health Practice and a company selling wheelchair ramps.