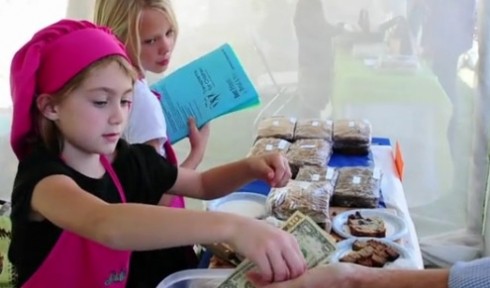 I often ask my four year old son what he would like to be when he grows up. It changes almost daily and I’m always guaranteed an entertaining answer. In one ten-day period recently he wanted to be a fireman, builder, space rocket driver and footballer and back again to fireman. So far so normal, I suppose. He’s still very young of course.

But I’ve been thinking a lot about why young people almost never tell you “actually, when I grow up I’d like to be my own boss”. When I was young – and despite being the bossiest (polite translation: single-minded) child in a 100 mile radius – it never seemed like an option open to me. I never even considered it.

A recent survey found that three quarters of 11 to 18-year-olds would like to start their own business in the future, and almost half say this has always been the case.It seems that TV programmes such as the Apprentice and Dragon’s Den as well as internet entrepreneurs such as Facebook’s Marc Zuckerberg are inspiring a new generation of wannabe bosses.

But ask any young person you know and I’m sure these figures won’t be borne out by their responses. Of course, it’s great news that young people are aspiring to entrepreneurship in theory, but what  stops this translating into reality?

Of course there are social and cultural issues that would take a lot longer than a single blog to explore, and there are plenty of really interesting studies into this issue. One US-UK study found that our genes are crucial in determining whether we are entrepreneurial and likely to become self-employed. It found nearly half of an individual’s propensity to become self-employed is due to genetic factors. The researchers found that, contrary to previous beliefs, family environment and upbringing have little influence on whether a person becomes self-employed or not.

I’m not sure I agree totally with this. I think some good leaders are indeed ‘born’ but there are so many other factors that impact on entrepreneurial start-up rates; redundancy, chance meetings, a sudden windfall…

One thing is clear – the future of our economy depends on the development of entrepreneurial skills within our schoolchildren today. And, despite the best work of a number of fantastic organisations including Young Enterprise, I think our education system could do so much more to promote entrepreneurship to young people from an early age. From the time they can read and write, I think we need to give young people the opportunity to learn, test and develop the skills required to survive in business.

Of course, if you’re lucky and concentrate then school provides the building blocks for setting up in business, such as IT skills, communication and numeracy.

But the majority of schools do little to teach self-belief, which is clearly crucial when studies have found that young people don’t go into self-employment due to lack of confidence. Also, how often did your  teachers mention that there would be an option to employ yourself one day? I didn’t hear anything of the sort, and my experience of careers advice was being channeled towards certain types of jobs (none of which I went into, incidentally).

While there’s an argument that the best leaders are born that way, to paraphrase one Lady Gaga, I strongly believe that there is a lot you can do to ‘teach’ entrepreneurship. But it needs to start young, and needs to be consistent.

Myself, I’m teaching my son the joys of self-employment bit by bit, every day. I explain that mummy can only come to every parents assembly and sports day because I am in control of my own workload and working hours, and show him how happy that makes me. He seems to be picking up on it. Now, when asked what mummy does, he reels off my company name and elevator pitch ending his spiel with “and she DOESN’T HAVE A BOSS”.

I’m dreaming of the day I ask him what he wants to be when he grows up and he replies:

“I’d like to spend my days worrying about not being able to take any holiday, how to handle ‘difficult talent’ and planning a vague exit strategy mummy”.

Or perhaps not. But I want him to at least know that it’s an option open to him. In an ever-changing competitive global economy, we owe it to our children to expand the horizons of their own ambitions and expectations. Right?