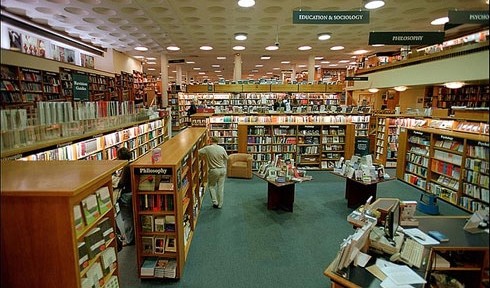 Toby Blackwell, 81, announced his decision to convert the chain into a John Lewis-style staff-owned group by saying: “I have seen all sorts of awful takeovers. I joined the business 55 years ago, I own 100% of the votes and I want the name to stay over the door. I am passionate about that.”
Blackwell said he was drawing up a new constitution for the chain – which has 37 permanent shops and 40 that open temporarily on campuses – and it would be based on the John Lewis partnership.
He said he was doing much of the work on the new constitution himself because “I don’t want to hire a lot of consultants”.
“No one will own shares in this company anymore,” said Blackwell. “There will be an annual bonus, paid out of profits, and the chairman will get the same percentage [payout] as the part-time lady on the till in a store.”
He said the bookseller’s staff were “very, very important” to its future success and was convinced that employees of John Lewis-style businesses performed better. “My wife loves Waitrose. The staff there smile, because they own it, and because they want to sell you more.”
The John Lewis partnership has proved more resilient than many of its rivals in the recession and research by the Cass business school says there is evidence that staff-owned firms performed far better than shareholder-owned firms.
Charlie Mayfield, chairman of John Lewis, said the structure meant “a happier workforce, more accountable management, a closer alignment of risk and reward and a fairer distribution of profit”.
He first got the idea of transferring ownership when he sat next to John Neill, the boss of employee-owned car parts supplier Unipart, at a meeting of a local training and enterprise council. He said his conversation with Neill was “an education”.
As part of a bid to cut costs and reshape the business, Blackwell announced earlier this week that it is closing its head office and sending staff to work in its stores. However, 25 are to be made redundant.