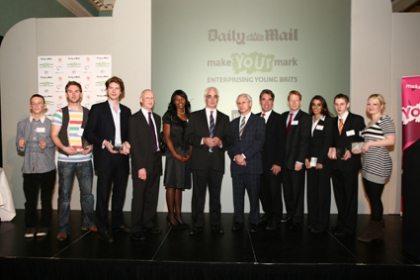 Priya Lakhani, a 27-year-old lawyer-turned-entrepreneur, won the Business category. Priya only set up her company Masala Masala seven months ago, yet is already selling her range of traditional Indian cooking sauces in shops and delis in over 30 countries. She has already seen a spike in sales via ocado.com as a result of the publicity around the awards, which has meant she has been able to give more homeless people in India a meal through her Masala Masala Trust.

Miles Templeman, Director General of the IoD and competition judge panel, said: “I’ve been really impressed with all today’s finalists but the winners stood out as exceptional young talents. These inspirational young people have shown creativity, determination and business nous. None have been blown off course by the recession, simply dealt with it alongside their other challenges.”

The Creative category was won by 26-year-old Adam Duffy and his company Looks Can Kill (www.kingsofneon.com, www.solecreator.co.uk) which makes custom designed stylish trainers. People can design their own online and receive the trainers in just a few days. Adam demonstrated the potential of his business by presenting each of the judges with a personalised trainer during his five-minute pitch.
Matt Lovett won the Teen category with his marketing company WOW Media. Matt made it to the finals last year but was unsuccessful. He didn’t give up and applied this year to go on and take the trophy. His business has blossomed and he employs six members of staff, despite the fact that he’s only 17-years-old!

The Rob Williams People’s Choice Award was also up for grabs. Decided by the public in an online vote, which closed minutes before the awards ceremony began, the award went to Dean Rhodes-Brandon, the 17-year-old that founded YourLocalCinema.com, an innovative not-for-profit website and information service that is designed to help those who are hearing or visually impaired to fully enjoy the cinema experience. This year the award has been presented in memory of Rob Williams, co-founder of the successful Dolphin Music Company and a finalist in last year’s Enterprising Young Brits Awards. Passionate about inspiring others, Rob was an Ambassador for the Make Your Mark campaign and tragically died earlier this month.

Run by the Make Your Mark campaign and supported by the Institute of Directors, The Daily Mail, HM Treasury and The Department for Business, Enterprise and Regulatory Reform (BERR) the Enterprising Young Brits Awards reward budding young entrepreneurs (aged 30 and under) who have turned their ideas into a profit-making reality, shining a spotlight on the next generation of British business big shots.

Harry Rich, Chief Executive of the Make Your Mark campaign and Chair of the judges, said: “Once again these awards have highlighted some of the fantastically enterprising young people turning their ideas into reality right across the UK. It’s great to see people making money in these tough economic times and we hope that this signals a bright future for British business.”

Secretary of State for Business, Lord Mandelson had this to say about the competition: “Enterprise and innovation are key to the UK’s future economic growth and success in today’s unsettled global market. Make Your Mark’s Enterprising Young Brits Awards are an important opportunity to honour inspirational young people who have demonstrated flair, determination and good business sense in making their ideas happen. I would like to congratulate all the nominees and wish them all the luck in their careers”.