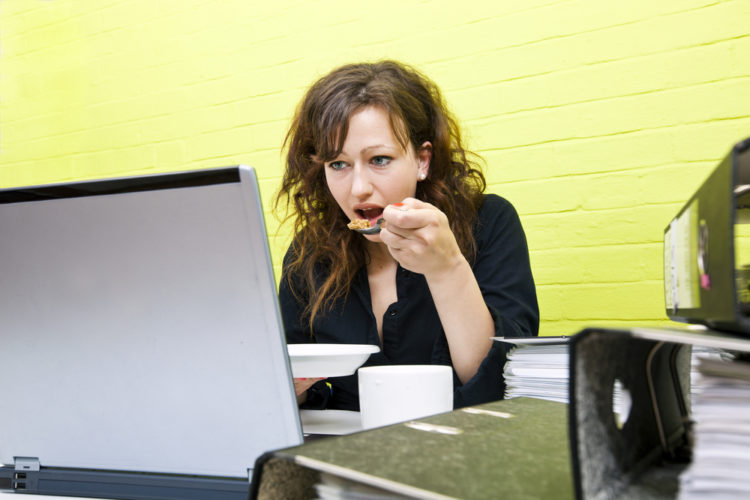 More than one in six UK workers surveyed may suffer from Misophonia, a strong dislike or hatred for specific sounds, as they have chosen the sound of people eating and breathing loudly the most irritating habit in the workplace.

Tech retailer, Ebuyer, has partnered with hypnotherapy expert and author, Dipti Tait to find out why certain habits in the workplace irritate us so much.

Dipti Tait – Clinical Hypnotherapist at The Cotswold Practice said,“The tasks we carry out at work require our brain to be focused and efficient. Our brain needs to be able to filter out distraction and noise quickly and effectively to be able to dedicate our full and complete attention to the tasks in our “to do” list with sharpness and reactivity.

“If our attention is being pulled in the direction of the colleague next to us eating their lunch noisily at their desk, or having a loud conversation across the partition, or even frantically typing while listening to music on their leaky headphones, this can be hugely distracting and can lead to poorer cognitive performance in the task we are supposed to be doing.

“Essentially our brain is having to work much harder to filter out this constant noise pollution which over time is mentally draining.

“Therefore, open plan offices would benefit from having quiet meeting rooms available for staff to use if necessary, and also employees should be trained to use cognitive techniques that enhance focus and concentration as well as encourage relaxation techniques.

“If the prolonged underlying stress in the workplace continues to build up in the employees system over time – this can lead to problems like severe anxiety, exhaustion, depression, paranoia and in extreme cases – burn out.”

As well as noisy eaters, other irritating work habits were also unveiled as part of the research. Questionable toilet hygiene was found to be the biggest bugbear followed by sinks left piled high with dirty crockery and jammed printers coming in as the third biggest annoyance in the office.

When asked how often their blood is boiled by the most infuriating situation, two in five (40%) said it happens on average two or three times every week.

Here are the top ten most common workplace irritations, with explanations of why people named them the most exasperating:

“People are often unwilling to clean up their own mess and leave the toilet suitable for the next person. They need to learn that the toilet brush is not their enemy and that a spray of air freshener can go a long way. As can an email to the facilities manager, explaining they’ve just blocked the toilet for whatever reason.”

Malcolm, a recruitment consultant from Slough.

“When you’re hungry after a long morning of work, the last thing you want is to have to wade through mountains of dirty dishes and cutlery in order to make your lunch. Nothing should get between a man and his food.”

Jamie, a civil servant from York.

3. Printer left jammed by someone who then didn’t clear it.

“It often falls to me to sort out the printer several times a day. Not because other people don’t know how, but because they can’t be bothered. If I didn’t unjam it, the whole office would back up.”

4. Mouldy food or milk left in the fridge.

“People who leave milk or food to go off in the fridge genuinely irritate me so much! First of all it’s a waste of perfectly good food. If they’d leave a note saying ‘help yourself’ it would stop it going to waste. Secondly, it’s gross and smells awful. The work fridge is a no-go area for me nowadays. I can’t face it anymore.”

Edi, a retail manager from Ipswich.

“There is never a steady temperature in our office, it’s always far too hot or absolutely freezing and it drives me mad! Sometimes it feels like we’re sat in arctic conditions when it’s 25 degrees outside because people turn the air conditioning on full blast.”

Tanya, a communications specialist from Edinburgh.

“Whenever I’m at my desk alongside a noisy eater it genuinely infuriates me, to the point that I will sometimes put my phone headset on just to try and block out the noise. It’s incredibly difficult to be a friendly face or voice at the end of the phone when someone is chewing so loudly in your ear!”

Iain, a receptionist from Southampton.

7. Lunch stolen from the fridge.

“It’s so annoying when you’re hungry and your lunch goes missing. A few bags of snacks I could write off as harmless (or an accident), but when your entire lunch goes missing it’s not anymore! I recently had an entire box of hummus and pita bread stolen. A week later, I again found someone had helped themselves to some of my snacks from the fridge. Leave my lunch alone!”

8. Milk used up by one person, leaving none for others.

“To have to resort to tea without milk is a sign that my career hasn’t worked out quite as well as I was hoping. There’s one person who makes an enormous bowl of porridge each morning, leaving the rest of us in the office fight over what’s left.”

Elliot, an IT technician from Skipton.

“Nobody wants to sit in silence, but there’s a handful of very loud people in my office who never seem to shut up all day. Surely it’s not possible to do a decent amount of work and constantly talk about Eastenders?”

Christine, an advertising manager from Bradford.

10. Spillages left all over the kitchen.

“There might not be any point crying over spilled milk, but when it gets underneath the things on the work surface and goes rancid, it does bring me close to tears. Plus, when you put your hand on what you expect to be a clean surface to find it’s sticky, as though someone sneezed into a tissue and used that to wipe the counter top, it’s really not pleasant.”

Glenda, a healthcare coordinator from Swindon.

Stephen James Marketing Manager said: “We provide supplies to businesses around the country, so we were really curious to find out what people get annoyed by the most.

“Busy days often mean that we get wound up much more easily at work than we do at home, but we all have colleagues that don’t help that situation at all. What is surprising, though, is how regularly these things happen. Just 6% said their pet peeves happen less than once a month, but 58% said more than once a week.”