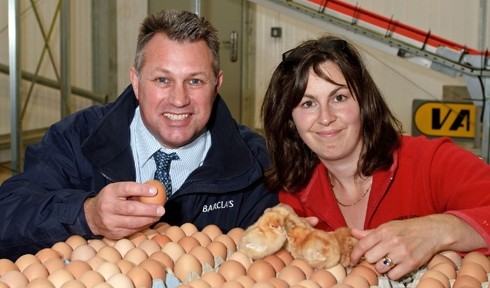 With new regulations affecting egg producers from January, Julie and her husband, David, have invested over £500,000 into the business to comply with new legislation. This is with support from Barclays Business, the RDA and RDPE, to help finance the installation of a 16,000 bird enriched colony laying house to meet with new EU guidelines.
A new grading house has also been built which will bring the eggs directly through to the grader. The arrival of 8,500 day old chicks will see egg production increase markedly on the unit in future.
Julie and her husband David took over running the family farm, Rosedown Eggs in 2000, and have since increased its business turnover eight fold and profit margins by five fold.
The farm, which is home to 30,000 chickens, supplies eggs across numerous retail outlets in Cornwall, including high end restaurants, hotels, shops, delis, local campsites and Eden Hospitalities.
In 2008, Rosedown Eggs made national and regional headlines when one if its chickens laid a record breaking egg, weighing in at 215g, roughly four time the size of a normal chicken egg.
Mum of four young children, Julie says the secret to her success is down to the support of her husband, having lots of energy, and a clear yet simple business model, she said: “We buy in new chicks at one day old which saves money and then rear them on ourselves.  We take other local producer’s eggs to help fulfil a growing order book of customers, as well as selling less productive older hens onto local smallholdings.”
The 16 acre farm has also diversified, with the farm offering educational school visits.
Julie added: “With the improvements being made in the business, including a new grading house, I am really excited about what the future holds for the farm and my family. There has been a lot of support from Barclays and local business organisations to get us to this stage which has been invaluable.”
Paul Hazzard, Barclays Agricultural Manger, Cornwall, has been working with Julie and David for a number of years and added.” This is a fantastic local success story hatched from a huge amount of hard work and determination.  I’m delighted to have been able to support Rosedown Eggs from its infancy to where it is today and look forward to watching the business grow in the future.”