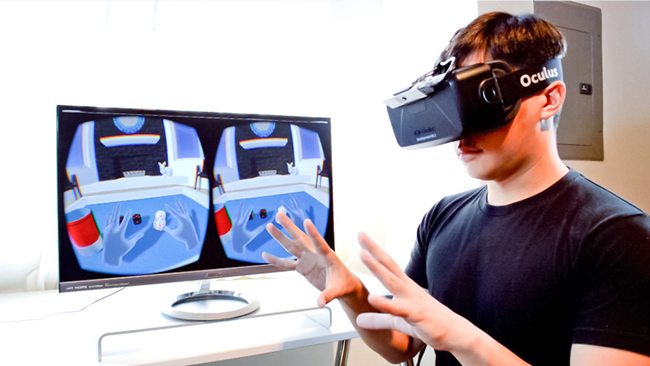 As technology develops at an exponential rate, our current reality seems to becoming more and more like the science fiction films of yesterday.

Handheld computers with over 100 GB of storage live in our pockets, cars are on their way to driving themselves, and we are coming closer and closer to emerging ourselves into virtual realities.

TechTimes.com defines virtual reality as, “the creation of a virtual world that users can interact with. This virtual world should be designed in such a way that users would find it difficult to tell the difference from what is real and what is not.”

This is usually achieved by a combination of a software program via computer, tablet, cellphone or other device connected to a specifically designed immersive VR headset. The technology often goes hand in hand with augmented reality, in which virtual reality technology is used to live within fantasy realms beyond the scope of the earthly world.

Thanks to technological development from previous models, and equipment prices become more affordable to a wider array of users, the last two years have seen an explosion of VR technology use.

In addition to the incredible popularity VR enjoys in the video game sphere, the utility of the technology has been recognized in a variety of fields; real estate developers, educational specialists, and prototype designers are just some of the professionals trying to take advantage of this revolutionary new tool. In fact, the VR market is expected to exceed 192 billion USD dollars by 2022.

Such a rapidly growing industry leaves ample room for growth, and taking the right steps will secure a fulfilling, long-term career in this sector.

Get the Right Degree

The training and education needed to join a VR company vary based on the type of work desired; back end programming positions ask for different competencies than the front end design, graphic, and marketing teams. For those looking to get an education specifically tailored towards Virtual Reality should first narrow down which sector of the business they would like to focus on; majors varying from applied mathematics and computer engineering to spacial and graphic design are all extremely useful in varying capacities.

Despite the enormous capacity for Virtual Reality technology, the industry is still mainly composed of smaller start-up companies, constantly on the brink of new advancements and developments. Going to Networking events, meetups, “hackathons,” and VR conferences is a great way to meet not only key people in the industry, but also to stay on top of the most current developments and to stay aware of new fields as the sector continues to evolve.

And it’s imperative to test the latest products on the market. VRTO, located in Toronto, Canada, is one of the largest immersive technology conferences in the world, hosting over 100 speakers annually. Other Virtual Reality tech hot spots include Shanghai and California.

Having the right educational background, being informed on the constantly changing technological landscape, and making the right connections with the instigators of the industry are the best strategies to finding and keeping a lasting career in Virtual Reality.