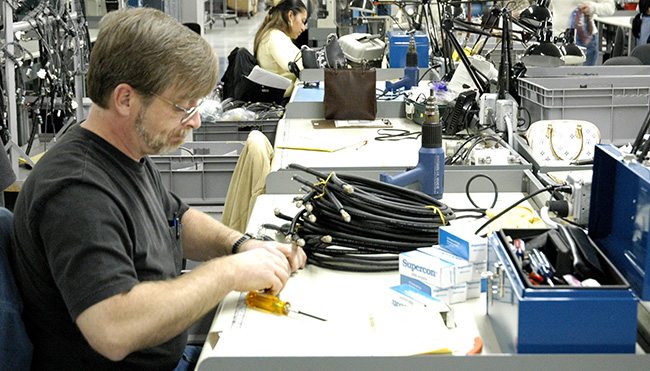 According to United Nations figures published at the end of last year, the amount of e-waste created across the world reached an annual high of 43 million tons, with only 8.6mil of this being recycled.

Much of the developed world’s waste electronics is shipped to developing countries, with 85% being sent to poorer parts of Africa. The twenty-acre Agbogbloshie dump in central Accra, Ghana, is so well known that Smithsonian magazine has perversely referred to it as “iconic” in one expose.

Wired attributes a sizeable proportion of the e-waste crisis to the increasingly slimline design of many electronic goods, rendering them harder for people to dismantle and recycle components effectively. Furthermore, they note that the adhesives keeping devices like smartphones together needs to be completely removed before any recyclables can be extracted, while batteries are hazardous to dispose of.

Despite 66% of the world’s nations having formal laws around WEEE (waste electrical and electronic equipment) disposal, only 41 countries currently collate computer recycling data. Clearly there is a lot of work that needs to be done to curb wastage. Here are three ways that governments and tech companies can make the effort to stem the tide.

Increase awareness of the value of raw materials in electronics

The old adage “think global, act local” certainly applies to e-waste; many clearance companies that offer WEEE disposal are taking the initiative to deduct the resale value of old equipment from their overall bills. On a macro level, however, the legislation around e-waste is somewhat variable, and adhered to far less frequently than it should.

This is arguably surprising, considering how much waste electronics are actually worth when broken down into their component parts. According to the UN’s International Telecommunication Union (ITU), the raw materials which made up the e-waste produced in 2016 alone were worth an estimated €55 billion, with the majority of this coming from the value of plastics, gold, and copper.

One of the computer sectors major players is already taking steps to address the waste inherent in WEEE disposal. Dell announced the launch of a pilot scheme at the start of this year, which would see gold from old motherboards recycled through a process with a 99% lower environmental impact than traditional methods. This gold will then be used in future Dell products, as well as a limited jewellery line, “The Circular Collection” (named for the circular economy Dell are adopting).

One of the biggest issues surrounding e-waste disposal has been the creation of an informal recycling sector for WEEE products. This is brought about by waste electronics being sent to other countries—a process deemed illegal under the UN’s Basel Convention. In 2016, one nonprofit added secret GPS trackers to 200 waste electronic items, with Fast Company reporting that 31% of them have ended up overseas to dumps like Agbogbloshie.

Informal e-waste recycling is particularly dangerous because of the toxins produced when recovering the recyclable parts of electronics. Al Jazeera notes the catastrophic emissions created when extracting copper wiring, and water supply contamination from the cyanide and nitric acid used to remove gold from circuit boards. Then again, if PC World’s report that only 8% of America’s e-scrap processing plants follow e-waste disposal guidelines is to be believed, the issues will hardly be improved if WEEE materials are dealt with in their country of origin.

Considering the environmental impact of the informal recycling sector, governments need to appropriately deal with the formal ways in which waste electronics are dealt with domestically. This could be done by reducing the heavy taxes on companies who manage their hazardous e-waste appropriately, and generally stricter internal enforcement on how the valuable materials within waste electronics is extracted.

The BBC notes that after lightbulbs entered the mass market, the decision was made to “artificially reduce [their] lifetimes” in order to encourage further purchases; this may well be the first example of planned obsolescence in the electronics sector. More recently, at the tail-end of last year, Apple made an announcement which seemed to give credence to a long-running conspiracy theory: That the iPhone and other i-Products are designed with a fixed end-date. Apple claimed that this was to prevent their lithium batteries from leaking and damaging other components, however a preliminary investigation has already begun in France over how true Apple’s statement is.

While the business model makes sense from an economic standpoint, it is an environmental nightmare; as more electronics are purchased in anticipation of old machines’ obsolescence, more (perfectly fine) devices are being jettisoned, and more often than not, in an unsustainable manner. The head of the sustainable cycles programme at the United Nations University noted his wish that these tech companies would “push in the direction to improve repairability” as opposed to needing to replace electronics on a near-annual basis.

Perhaps the lawsuit against Apple will lead to new legislation to tackle this; until then, companies should think beyond the bottom line and tailor their designs and development to the circular economy. This will benefit not just the environment, but their customers as well.