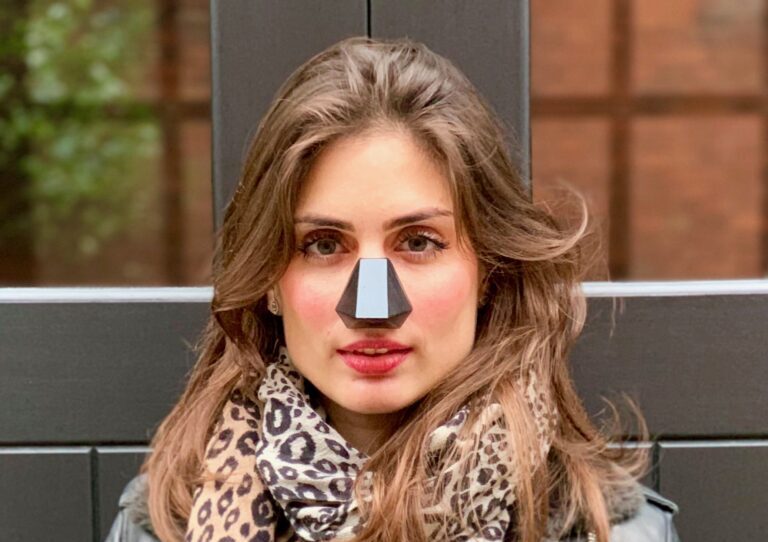 Nosy is a radically innovative line of wearable technology designed to improve your breathing health.

The main unique selling proposition of Nosy is the removal of the mouth coverage which allows users to protect themselves from air pollution without comprising their lifestyle.

The air-filtering system is created in partnership with the highly-skilled team of former Dyson Engineers at Aetha Design in Poole, Dorset.

The World Health Organization states that 92% of the cities in the world have poor air quality, and about 1 in 9 deaths worldwide are now linked to air pollution. According to Berkeley Earth, whilst walking around central London you may inhale the equivalent of 3 cigarettes worth of air pollution – and that can wreak havoc on your health. Meanwhile, Kings College London researchers have found that air pollution in the underground can be as high as 88 times that of the limit set by the World Health Organization.

Although more and more people are turning to face masks to fend off the worst of the air pollution, these masks are ineffective at filtering airborne particles and fumes from burning of fossil fuels. These masks were originally designed to protect medical practitioners from splashes of liquid, and therefore lack the design and specific requirements for filtering air and Volatile Organic Compounds (VOCs).

For face masks to be effective at filtering air, they would need to maintain an extremely tight seal, similar to N95 medical grade respirators. In turn, this makes effective respirators extremely uncomfortable to use for extended periods of time.

Non-disposable face masks suffer from another key problem: being unhygienic. In the short-term, they become warm and damp due to condensation, which forces the wearer to breathe in the air that they have just exhaled; overtime they become the perfect breeding ground for various bacteria and viruses.

On average, people breathe over 20,000 liters of air per day. As air pollution levels continue to increase worldwide, we can no longer sit idly and wait for the government to take action. Now more than ever, it is our personal responsibility to ensure the health of our lungs.

Nosy is designed to be an essential part of wearable tech, especially in places with poor air-quality, such as large cities.

With Nosy, we are saying goodbye to the ineffective and dated way of protecting your breathing health and welcoming a new approach that can better offer air-filtering properties with convenience and style

Beautiful and sustainably-designed, each Nosy boasts a dual-filtration mechanism with HEPA and Activated Carbon filters. HEPA removes 99.97% of particles that can penetrate deep into your lungs such as PM2.5, and the Activated Carbon interacts with VOCs at a molecular level to breakdown any trace of pollution.

Alongside this emphasis on truly effective filtration, the design of Nosy is eye-catching and modern, and comes in three stylish colours (so far!) – soft matte black, matte white and metallic rose gold.

On top of this, we are proud to say that each Nosy is made of biodegradable plastic (hemp fibers to be exact!) and can be hand-washed, which prevents bacteria from accumulating.

This innovative gadget is now in the final stages of functional prototype and – with your support – can be brought to market in as little as three months.

Nosy is the brain-child of Carina Cunha, a London-based innovator and fashionista. She holds an Economics and Political Science degree from Columbia University in New York City, and a degree in Differential Psychology from the University of Edinburgh.

After moving to London, Carina became acutely aware of the quality of the air that she was breathing every day when commuting via the city underground. She then made it her mission to solve the problem of air pollution that commuters face – not just for herself but for the world.