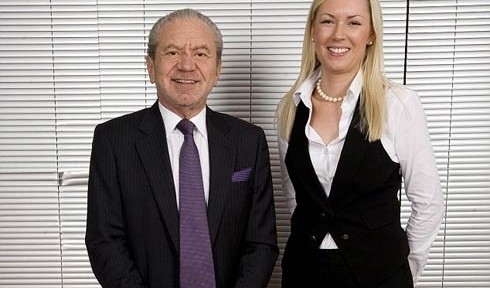 The former Enterprise Tsar, head of Amstrad, and now star of The Apprentice urged women to be allowed to be upfront at the start of interviews to enable them to concentrate on their talents and avoid a ‘psychological charade’.
The Labour peer, spoke in a debate in the House of Lords today and said that he has tried to address the issue in the past he has been met with a ‘knee-jerk reaction’ from people who ‘don’t want to hear what I’m saying’.
Sugar said: ‘I believe the employment regulations for women whereby the prospective employer is not able to inquire about the interviewee’s status regarding children or childcare or indeed their intention of becoming a parent are counterproductive. Some women may agree with me on this.
‘As things stand, regardless of current laws and regulations, interviewers are forced to play out some kind of psychological charade where they know their obligations under law but effectively in some cases make up their mind in advance about the prospects of employing the person sitting in front of them.
‘I say women should be forthcoming when being interviewed, declaring their status regarding children and childcare so as to pre-empt the unanswerable questions in the mind of the interviewer and then focus on the most important thing – what skills they can bring to the company and why they should be employed.
‘I would be very impressed by a person who settled the matter at the outset, telling me how they are going to organise their life in order to do their job but, more importantly, how they are going to get on with the job in hand, what they are going to bring to the party, because such people would jump up in my estimation.’
‘In the past 40 years, I have had the good fortune to employ a number of women in senior executive positions,’ he said.
‘I have to say I have found women in business to be very focussed, determined and ambitious.
‘Indeed, in top management positions they seem to place little importance on building ego and simply get on with the job in hand in a very efficient manner.’
Lord Sugar added that The Apprentice had been won by a woman for the last two years. The most recent winner was Stella English, a  31-year-old mother of two. The  2009 series was won by Yasmina Siadatan who is on maternity leave from Lord Sugar’s company.
‘One of them is now on maternity leave,’ he said. ‘She has done a very good job and, of course, her position will be completely open to her when she returns.’
Is Lord Sugar right, should employers be allowed to ask this level of question at interviews?