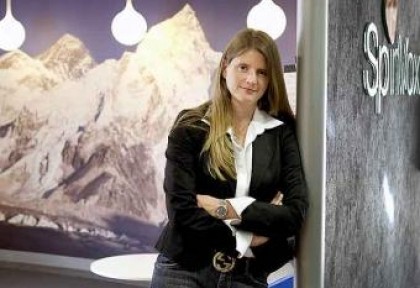 Domecq won the award against stiff competition from the other short listed nominees: Michael and Xochi Birch, co-founders of social networking phenomenon Bebo and Amancio Ortega, chairman, Inditex Group, one of the world’s largest clothing distributors.

“I am very honoured to receive this award for entrepreneurship from such a distinguished and dynamic group of business leaders,” said Christina Domecq.

“Keeping the entrepreneurial spirit alive is absolutely vital in this economic climate.  After all, history tells us that it will be innovative and disruptive technology and service companies that will help end the recession by kickstarting and driveing real growth in both the European and global economy,” continued Domecq.

SpinVox was co-founded in 2003 by Christina Domecq, CEO and Daniel Doulton, Chief Strategy Officer, after a moment of inspiration when Christina received fourteen voicemails in one morning and asked, “Why can’t I get my voicemails as text?”

That initial thought, combined with the technical expertise and entrepreneurial drive of the co-founders, has led to SpinVox raising in excess of $200m to fund an extensive and continuous research and development programme, which has resulted in the creation of the company’s Voice Message Conversion System™ (VMCS) – protected by over 60 patents worldwide – which works by combining state-of-the-art speech technologies with a live-learning language process.

SpinVox is now the largest commercial speech platform in the world and is implemented as a carrier-class cloud service which is used daily by tens of millions of people for automatic delivery of converted speech to SMS text, email and web environments.

In February 2009, SpinVox reached a major milestone and announced that it had converted more than 100 million voice-to-text messages.  This number has been achieved in just two years since its service started to be rolled out with carriers around the world.

The majority of SpinVox 30 million users worldwide are accessing the service via the 13 carriers on five continents which already offer SpinVox to their subscribers, including Alltel (now owned by Verizon), Rogers Wireless, Cincinnati Bell, TELUS and Sasktel in North America; Vodafone Spain in Europe; Vodacom in South Africa; Telstra in Australia and Movistar in Chile.

“Christina is a remarkable entrepreneur who has recognised a genuine need – to take the pain out of voicemail – and converted that need into a global speech-to- text business which is changing the way people communicate.  Her intelligence, drive and passion make her a worthy winner of the Entrepreneur of the Year title,” said Mick Buckley, President and CEO, EMEA, CNBC.