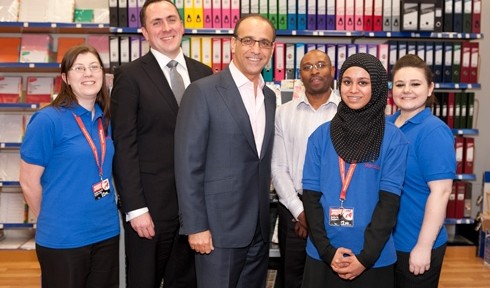 More than 100 existing Ryman staff, from sales assistants to store managers, have been put through their paces on Vocational Training Programmes, thanks to a partnership between Ryman and Hawk Training, a leading work-based training provider.
And Ryman’s six latest apprentices are being assessed and selected at The London Academy of Apprenticeships, a brand new, state-of-the-art £1 million apprenticeship-training facility, launched by government-funded Hawk Training at the end of 2011.
Theo Paphitis, star of TV’s Dragons’ Den and Chairman of Ryman Stationery said, “The great thing about apprenticeships is that people can earn while they learn. The feedback from our apprentices is overwhelmingly positive, as the experience builds confidence and increases their overall understanding of business.”
The many business benefits of having apprentices include:
Ryman apprentice Suma Begum, aged 16, from East London, who gained six As and four Bs at GCSE, had always been clear that she wanted to go straight into the world of work after school. She praised the company’s strong progression route and starting salary. She said: “All my friends have gone on to college, but I’ve gone into work, it has really boosted my confidence.”
Fellow Apprentice Rebecca Cloono, aged 21, from South-East London, who joined Ryman last spring, was promoted to Supervisor within three months and is now progressing on to the Advanced Apprenticeship in Retail Skills. She has helped to mentor and train subsequent apprentices, including Suma. Rebecca said: “Apprenticeships were never mentioned at school, I got the idea from my brother and sister. The difference with an Apprenticeship is you’ve got the experience too!”
Ryman employee Jason Mark, aged 42, has worked in the company’s training department for a number of years. He feels that sometimes in society, older people who want to learn are overlooked and can sometimes be ‘left on the shelf.’ Jason added: “I’m filled with so much more confidence. I didn’t realise how much I could learn from the Business Administration apprenticeship. I would say my confidence has increased by 30%. I now know that I can my job far more effectively.”
In addition, Stuart Britton, a member of the Apprenticeship Ambassadors’ Network, and CEO of SEC Recruitment, a large recruitment company based in London, said: “Our apprentices have generated nearly £1 million worth of business in two years. We’re so pleased with them we have just employed three more!”