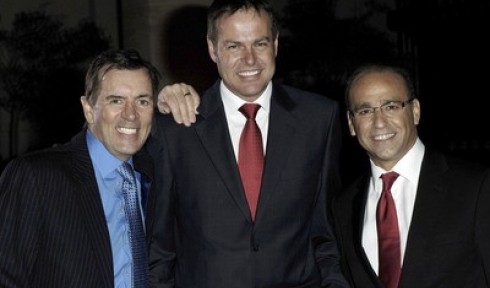 In a bid to ensure that the filming continued and budding entrepreneurs looking to follow in Levi Roots footsteps were not let down, they embarked on what could be described as being like one of those impossible challenges featured on BBC’s Top
Gear.

Appealing
on Twitter, Bannatyne’s call was heard by Brown’s Chauffeur Service who
arranged to collect him and his family and return them to London by car
and ferry crossing the Channel at Calais.

Bannatyne’s epic 900-mile journey began on Sunday morning at 4.00am when
he and his family were collected from their holiday home in Mougins, France, which featured in last week’s ‘Out of the Frying Pan’ programme, by the first of their two chauffeur driven cars for the epic 18 hour trip set to cost £3,000.

Bannatyne said: ‘We had different of reasons to get back. Me for Dragons’ Den and my children for  school after the holidays so I had to give it a go.’

Bannatyne originally joked that ‘Theo is thinking about getting the bus from Spain, for heavens sake!!!’ before two days later embarking on an epic journey of his own.

However Bannatyne & Paphitis’ Palin-esque trips may have been in vain as fellow dragon Peter Jones had decided to spend his family Easter holiday in Barbados, an impossible location to return from using anything other than air travel prompting another tweet from Bannatyne ‘[Peter Jones] is stranded in Barbados. Feel his pain’

This news also prompted another tweet from from Bannatyne, saying ‘Yes I am going to get back, we are going to put a waxwork dummy in [Peter’s]chair & see if anyone notices’.

Jones had previously joked with Bannatyne on Twitter that’ they’ll have 2 start without me. [Duncan] will have 2 call me during a pitch 2 ask whether to invest or not.’ continuing ‘Don’t know how the Dragons will cope. Normally they wait 2 c if I like the idea b4 making an offer. [Duncan] will be lost without me.’

The BBC however decided to wait for the real Peter Jones to return and took the decision to delay filming for a few days to ensure all five Dragons’ could be in their chairs for the series set to be on our screens in the summer.

Other high profile entrepreneurs and television personalities stranded following Easter breaks were ex-Dragon and founder of School for Start-ups Doug Richard, who was desperate to return from Nairobi.

Richards was in Nairobi where he had been climbing Mount Kenya and was desperate to return to London to host the ‘Find, Pitch and Close, The Art of Securing Investment‘ event to be held at University College in London.  However as that wasn’t possible, The School for Start-ups was forced to cancel the event.

Host of Match of The Day, Gary Lineker, also found himself and his family stranded following a holiday in Tenerife prompting a 24hour journey by car and boat arriving at the BBC studio with only two hours to spare.