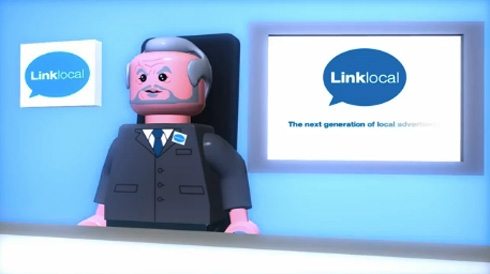 Amscreen, which is the UKs largest network of digital screen advertising screens, run by CEO Simon Sugar decided to embrace the satirical animations which have been a huge hit with viewers of the UK for the re-launch of their Linklocal brand

Simon Sugar said, “We wanted to re-launch Linklocal with a bang, and what better way than to create a fun video to spread the word and get people talking about it? The Boleg Bros’ work is hugely popular and so it seemed like the perfect fit. We hope people enjoy the video and visit Linklocal.co.uk to find out more”.
The service run from the Linklocal website provides very targeted and local advertising enabling small businesses to pinpoint exactly where screens are located and place messages on them by simply adding text to a selected template.
The screens are situated in high footfall environments such as petrol stations, convenience stores, waiting areas of doctors and dentists surgeries, and the screens enable local companies to showcase their messages to drive more local customers to their business and the company believe that they will be the modern day equivalent to advertising in local newspapers.
This animated video produced by the Gloucestershire team would have taken the pair an average of three full working days and if you wanted something similar for your own business would cost from £6,000.
The Boleg Bros’ animated videos of The Apprentice can be watched here.