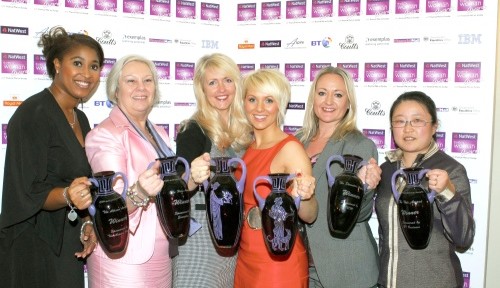 In this, their 10th year the NatWest everywoman Awards are reaching out to women in enterprise across the country to put themselves forward.  Supported by government and big business alike, the awards acknowledge the drive and tenacity required for successful enterprise, symbolising UK’s best business success and inspiring and motivating the next generation of female entrepreneurs.

The NatWest everywoman Awards are free to enter and nominations can be made by business owners or those connected to them by 20 July 2012.  The core award categories are:

Artemis is Goddess of the Hunt and Protector of Youth. This award is given to the most inspirational woman running a business who is aged 25 or under.

Demeter is Goddess of the Harvest. The Demeter Award will go to the most inspirational woman running a business who is aged between 26 and 35.

Athena is Goddess of Wisdom. This award is given to the most inspirational woman running a business who is aged between 36 and 49.

Hera is Queen of Goddesses and her wisdom and ability to inspire provide the basis for this award. This award is given to the most inspirational woman running a business who is aged 50 or over.

Other award categories include:

Iris is Messenger of the Gods, and is awarded to the most inspirational and successful female entrepreneur who runs a technology business that makes a difference, provides real solutions in the world today and, ultimately, is instrumental in building a smarter planet.

Hestia represents the hearth and home and is presented to a female entrepreneur who runs a rural business contributing to the local economy.

Gaia represents the earth and is presented to a female entrepreneur whose business has a clearly defined social and/or ethical purpose.

Karen Gill MBE, Co-founder and Director of everywoman says, “SMEs make up over 99% of the total number of businesses in the UK so in terms of our economic health it is vital that we support and acknowledge their contribution to Britain plc. If we do not take steps to champion female enterprise so that future generations see it as a viable career choice, we will risk irreparable damage to our already fragile economy.

“Over ten years the NatWest everywoman Awards have done just that, recognising scores of women who have achieved business success through hard work, determination and passion and who are role models for future generations of female entrepreneurs.

Anne Mcpherson, Managing Director, Diversity in Business, NatWest says, “We are delighted to support the NatWest everywoman awards for the 10th year running. Over the years the awards have been a great encouragement to women entrepreneurs. At NatWest we have certainly seen an upturn in women owned businesses in the past few years and we are committed to encouraging more female entrepreneurship.  Our 200 Women in Business ambassadors across the country share and understand our customers’ ambitions and provide the coaching and mentoring that  helps them fulfill their potential and build successful businesses”.

Nominations are made online at www.everywoman.com/ewawards until 20 July and will be judged by a panel of accomplished businesswomen and entrepreneurs.

The winners will be announced at a ceremony held on 5 December 2012 at The Dorchester in London attended by celebrities, VIPs and major figures from the worlds of business and politics. ­