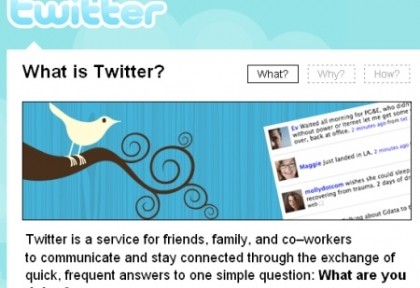 Twitter (www.twitter.com)
has quickly grown from being something only known to a group of early
adopters, and those at the leading edge of the social networking
community, into a phenomenon.

Twitter is essentially a social networking forum that allows you to
state what you’re doing, thinking, or say anything at all that you want
in 140 characters or fewer. This message is then relayed to your
‘followers’. These are the network of other Twitter users (Twits) who
have chosen to follow you and read what you have to say. You can also
follow other Twits, who may be people you know or don’t know. As a rule
you can only see the tweets of other Twits you follow and vice versa.
If, after reading another person’s posts (Tweets) you would like to
respond or add to you can reply using an ‘@’ response and engage in
direct conversations.

So in its construction Twitter is much like any other social
networking site, such as Facebook, My Space or Linkedin, in that you
can choose both the people you connect to and those who connect to you.
The difference is that you have only 140 characters in which to say
what you have to say.

This brevity of communication gives Twitter potential advantages
over other social networks when it comes to business. You can
communicate with people quickly, informally and about any topic that
maybe of interest to you, (commercially or otherwise). Also, because
Twitter is real time, it allows you to track what’s being said about a
product, a service, or your company, whether that’s good or bad, right
now.

Twitter has been used as a way to raise and resolve service issues
since its very early days. Mozilla, the company that develops the
Firefox internet browser, uses Twitter to make users aware of new
software updates. If a user is experiencing problems with their Firefox
browser they can tweet or direct message Mozilla explaining their
difficulty. This is then treated by Mozilla as a signal to get in touch
with the user. This type of interaction can often turn a complainant
into a promoter of a brand when they see such a proactive response to a
problem.

However, the beauty of Twitter in this area from a cultural
perspective is that as an organisation you don’t have to set up a
“Twitter watch” department. At ntl:Telewest Business the customer
issues are picked up by employees who spot “stuff” when they are on
Twitter as individuals. They are acting as “real people” who want to
help resolve customers or at least point the right people at the
problems. Many other companies are starting to adopt this viral “let’s
look after our customers and our brand” approach on Twitter

When it comes to selling to consumers, online brands have also been
quick to recognise the effectiveness of using Twitter as a customer
service tool. The fashion brand, ASOS.com is an excellent example in
this space. Not only does it use Twitter to make company announcements
and distribute discount codes, but it also has a separate
@ASOS_HereToHelp identity devoted to resolving customer problems.
Twitter’s real time search capability means that ASOS’s customer
service staff can proactively monitor the site for mentions of ASOS in
relation to lost deliveries and poor service. When it encounters
complaints, its workers then tweet back to ask how the problem can be
resolved before taking action.

Some companies are claiming that using Twitter can now be measured
at a bottom line level, computer manufacturer Dell, for example. It
uses its Twitter feed to advertise promotion codes and special offers
on its products; it recently estimated that doing so had brought in $3
million in extra revenue that would not have come in through other
sources.

The potential commercial power of Twitter extends beyond its use as
a sales promotion tool for recognized online brands. Its ability to
provide an instant view of particular keywords being discussed and by
whom can be invaluable, especially if you use Twitter via a desktop
application such as Tweetdeck, which allows you to spot trends and
keywords automatically.

For example, someone might ask their followers about their
experience of purchasing software or corporate networks and if this is
what you sell it’s a golden opportunity to offer help or ask a couple
of qualification questions. A word of warning though, notwithstanding
the fact that you’re (hopefully) not going to attempt an unsolicited
140 character pitch on your product, there is an etiquette on Twitter,
(or should that be Twetiquette), which it is best to observe. Think of
it like being stood at a hotel bar, you can say hello to someone and
attempt to start a conversation, if they engage then great, if they
don’t want to talk then it’s best to move onto someone who does.

As Twitter’s profile increases, the downside is the rise in the sort
of stuff you see being attracted to any growing part of the internet,
Gurus of all persuasion, life coaches, people offering to write your CV
and invitations to connect to sites of a dubious nature are on the
increase exponentially, but then again you can choose not to follow or
you can block them from following you if you want to.

However, whilst Twitter is not designed to, nor do I think it
aspires to be a business to business sales channel, it’s the smart
companies, the smart (sales) people and those with a real sense of
engagement with their own organizations that are spotting and acting
upon its real time, “customers in your face right now” potential to
solve problems and seek sales opportunities.

So if you’re looking for something that will be a magic bullet to
hit your sales numbers, then Twitter isn’t it. What it is though is
somewhere you can find out what people are talking about right now. And
if that happens to be your product, your competitor’s product or a
problem you could help solve, that’s well worth knowing.