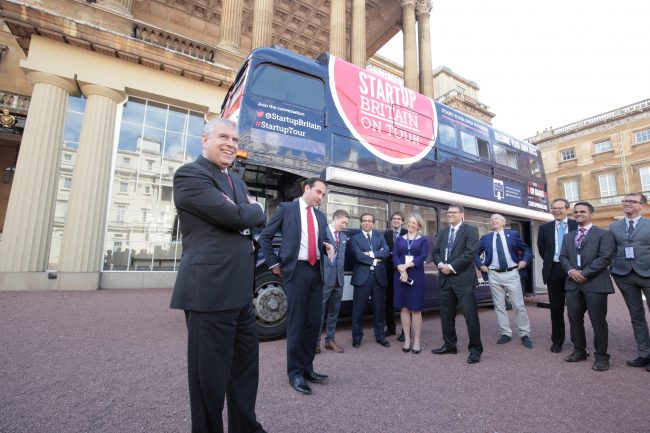 Now in its fifth year, the StartUp Britain bus tour – powered by NatWest and sponsored by 123 Reg and .uk – aims to provide inspiration and support to thousands of aspiring entrepreneurs.

The Duke of York told guests: ” It’s a real pleasure to see the StartUp Britain bus in the Quadrangle of Buckingham Palace. Coming on board might not only bring you the idea of starting your own business; you could be solving a problem that nobody knows needs to be solved. That’s the thing about being an entrepreneur – it’s somebody who finds something that needs to be solved and just gets on with it. It may be that you have plenty of those moments but don’t have a method to take it to the next stage, and going to this bus is one way of being able to do it.

Good luck to everybody on board, inspired people of any age or description because entrepreneurs are not just young – there is no barrier to being an entrepreneur, that’s probably the most important thing that people should do”

The Duke also announced the launch of the sixth Pitch@Palace competition, which offers entrepreneurs the opportunity to showcase ideas to a global audience capable of developing their business. A huge success, the competition has already helped 205 businesses grow.

The tour is part of an ongoing partnership between StartUp Britain and NatWest whereby a 1966 Routemaster owned by the bank travels across the country to promote entrepreneurship. Parking in high-footfall town squares and offering free, impartial advice, the bus tour celebrates entrepreneurial communities across Britain and inspires individuals to turn their business ideas into action.

After stops in Old Spitalfields Market and Brighton, the bus will be taking up prominent positions in Birmingham’s Victoria Square, Manchester’s Piccadilly Gardens and Glasgow’s Buchanan Street and will be visiting Truro, Canterbury, Leicester, Lancaster, Darlington and Aberdeen, among many other towns and cities.

The 2016 tour has a distinctly local flavour, with energetic entrepreneurs recruited in each town to get on board and give advice. They will be joined by local ‘experts’ including accountants, lawyers and professional business advisers. Also on-board will be representatives of national partners including the Intellectual Property Office, the National Enterprise Network, The Prince’s Trust, Entrepreneurial Spark, UnLtd and the British Library Business &amp; IP Centre Network.

Matt Smith, director of StartUp Britain: “The fact we are now visiting more locations than ever before clearly shows how far Britain’s entrepreneurial spirit spreads. What’s more, as we travel from place to place we will gain more experience, and more inspiration to pass on to the next city. Certainly, the StartUp Britain bus tour is a great way to come face-to- face with some of Britain’s most innovative individuals”.