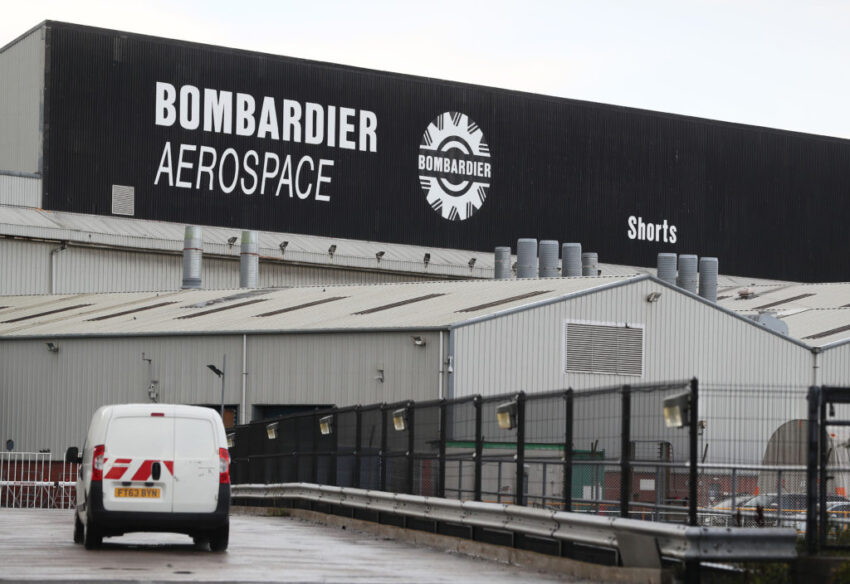 Almost 500 jobs are to go at aircraft manufacturer Bombardier in Northern Ireland in a bitter pre-Christmas blow for workers.

More than a tenth of core staff face the knife under cost-cutting measures aimed at improving the Canadian-headquartered firm’s long-term competitiveness.

Bombardier produces the wings for its new aircraft, the Airbus A220, in Belfast.

Trade union leaders pledged a global campaign against the “bombshell” announcement that jobs are expected to be shed by March.

Bombardier is one of Northern Ireland’s largest employers, but with around 2,000 job losses in the space of two years there were warnings that the devastation of staff would turn to anger.

It comes less than a year after the firm fended off a bid by part of the US administration to impose tariffs on sales of the A220 which could have spelled disaster for the Belfast operation.

Unite regional secretary for Northern Ireland Jackie Pollock said: “This announcement is a cruel blow for the Bombardier workforce in the mouth of Christmas.

“Unite has feared for some time that Bombardier might be bringing forward large-scale redundancies but this news exceeds our worse fears.”

He said the jobs under threat ranged across all skills and occupations and excluded potential job losses among agency workers/sub-contractors and the possible future outsourcing of so-called “non-core activities”.

Bombardier is one of the biggest employers in the country, with around 4,000 workers, and it has a large base in East Belfast.

Earlier this year, threatened US trade tariffs placed a major question mark over aircraft production there and prompted the intervention of Prime Minister Theresa May.

Amid a major trade dispute with rival aircraft manufacturing giant Boeing, the US administration relented at the last moment and Bombardier jobs were saved.

Mr Pollock said: “This workforce fully supported Bombardier in a dispute last year and the early part of this year against the American Government, against Boeing, and stood firm with the management of this company and this is how they are getting repaid.”

He said he expected support from unions in North America, which are going through a similar process as part of the global staffing review by Bombardier.

The trade union leader added: “The redundancies in Belfast seem disproportionate to other parts of the Bombardier group and we seem to be the hardest hit, with about 10% of our workforce going to be made redundant under this announcement.”

Around 1,000 jobs were lost at the Belfast plant in 2016 as part of a global restructuring.

Another 375 redundancies were announced last year.

Michael Mulholland, GMB union organiser, said: “Bombardier jobs are crucial to Belfast’s economy and GMB will fight tooth and nail to save them.”

“We acknowledge the impact this will have on our workforce and their families and we continue to explore opportunities to help mitigate the number of compulsory redundancies.

“However, we need to continue to cut costs and improve the efficiency of our operations to help ensure our long-term competitiveness.”