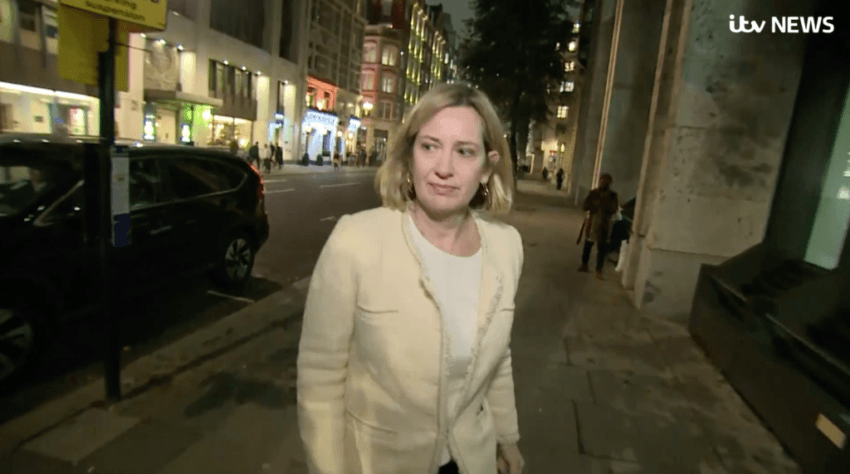 Amber Rudd has resigning from the cabinet and quitting the Conservative Party in disgust at Boris Johnson’s “purge” of the party and his “failure” to pursue a deal with the EU.

In a bombshell move that will rock the government, the work and pensions secretary says she is quitting because there is “no evidence” Johnson is seeking a deal with the European Union — despite claims that it is his priority.

Rudd has also attacked the prime minister’s decision to kick out 21 senior Tories last week — including the former chancellors Ken Clarke and Philip Hammond and Churchill’s grandson Sir Nicholas Soames — as an “assault on decency and democracy”.

Rudd branded the “short-sighted culling” of One Nation Tories an “act of political vandalism” that will damage the party’s chances at the next election. She vowed to fight it as an “independent Conservative” away from her seat of Hastings and Rye, where she has a majority of just 346.

The resignation of Rudd, one of Johnson’s closest personal friends in the cabinet, will come as a hammer blow to the prime minister just 46 days into his premiership.

It follows the decision of his brother Jo to quit as universities minister last week. At least six cabinet ministers share her views and at least one is also considering whether to resign.

Rudd says she took a job in Johnson’s cabinet “in good faith” and accepted “no-deal had to be on the table” because that was the “best chance” of getting a new deal. But she adds: “I no longer believe leaving with a deal is the government’s main objective. He’s so focused on one element, preparing for no-deal, he’s not engaging enough with the need to get a deal.”

She added: “My mother used to say: ‘Judge a man by what he does and not by what he says.’ I am concerned that he’s not doing enough to make true what he says is his priority.”

It is with great sadness that I am resigning as Secretary of State for Work and Pensions and Minister for Women and Equalities.

It has been an honour to serve in a department that supports millions of people and can be such a force for good. I would like to pay tribute to the thousands of people who work for the DWP across the country. They are committed public servants and I am proud of the work that we have done together over the last 10 months to create a more compassionate welfare system.

I would also like to thank you and the Chancellor of the Exchequer for your support in the recent Spending Review. I am so pleased that you committed to spend millions more supporting the most vulnerable in society, and I hope that the Government will stay committed to going further at the next fiscal event, building on the work the department has done.

This has been a difficult decision. I joined your Cabinet in good faith; accepting that ‘no deal’ had to be on the table, because it was the means by which we would have the best chance of achieving a new deal to leave on October 31.

However, I no longer believe leaving with a deal is the Government’s main objective.

The Government is expending a lot of energy to prepare for ‘no deal’ but I have not seen the same level of intensity go into our talks with the European Union who have asked us to present alternative arrangements to the Irish backstop.

The updates I have been grateful to receive from your office have not, regretfully, provided me with the reassurances I sought.

I must also address the assault on decency and democracy that took place last week when you sacked 21 talented, loyal One Nation Conservatives.

This short-sighted culling of my colleagues has stripped the party of broad-minded and dedicated Conservative MPs. I cannot support this act of political vandalism.

Therefore, it is with regret that I am also surrendering the Conservative whip.

Britain’s body politic is under attack from both sides of the ideological debate. I will now play whatever role I can to help return it to a better place.

I have been lucky to have had extraordinary support from my Conservative Association since I was adopted as their candidate in 2006. Three times they helped elect me as their MP, keeping Labour at bay through nail-biting campaigns.

I remain a proud conservative and will continue to champion the values of fairness and compassion, and to support my constituents of Hastings and Rye.

I have resigned from Cabinet and surrendered the Conservative Whip.

I cannot stand by as good, loyal moderate Conservatives are expelled.

I have spoken to the PM and my Association Chairman to explain.

I remain committed to the One Nation values that drew me into politics. pic.twitter.com/kYmZHbLMES