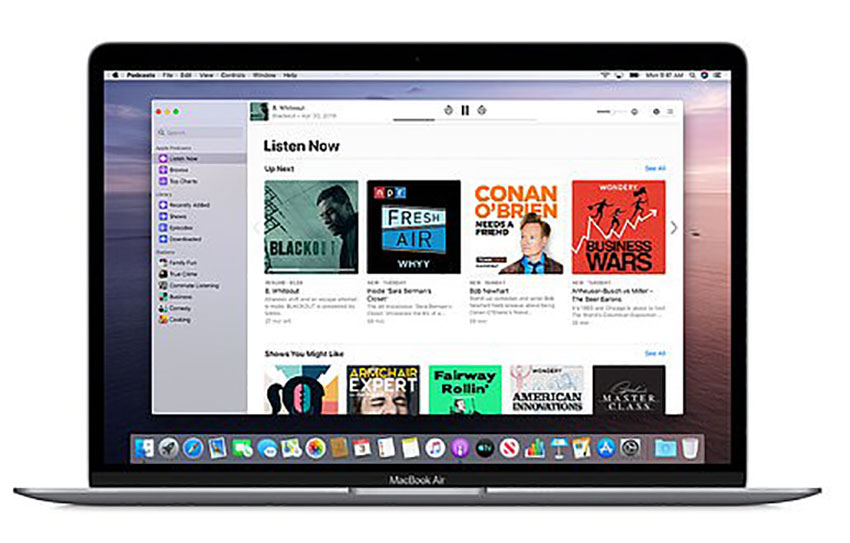 Following months of rumors, the firm revealed it will be killing off the 18-year-old music library in favor of its three newer entertainment apps: Apple Music, Apple Podcast, and Apple TV.

Apple says you’ll still have access to all of your existing music, whether you ‘downloaded the songs, purchased them or ripped them from a CD.’

The firm also promised the new system will include ‘all the features you’d expect from iTunes, all while being blazingly fast.’

In addition to the death of iTunes, Apple also confirmed another long-running rumor: the launch of ‘dark mode’ for iPhone.

The firm unveiled the sleek new design option alongside iOS 13, which will come with faster download speeds, smarter task reminders, a new keyboard to allow for ultra-fast swipe-typing, and updates for Mail, Notes, and Safari.

Apple kicked off WWDC 2019 on Monday with a more detailed look at its new streaming services and the latest operating systems for its family of devices. It also took the wraps of its first new Mac Pro in years, boasting a cheese grater-style tower, and the new macOS, Catalina.

Among the most notable announcements are new security features similar to those already seen in Google and Facebook, including a ‘Sign in with Apple’ tool designed to authenticate your identity using FaceID ‘without revealing any personal information.’ 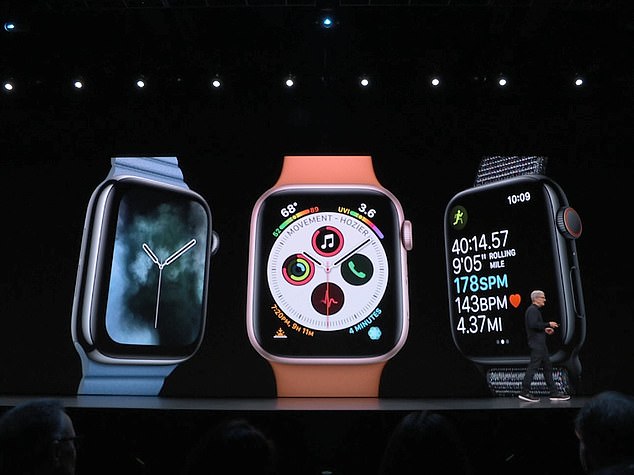 Apple also revealed the App Store is finally coming to Apple Watch, allowing users to download apps directly to the wearable for the first time, and unveiled the new period-tracking app, Cycle Tracker.

CEO Tim Cook started off the event in San Jose with announcements for Apple Arcade, Apple Card, and Apple TV+, including the reveal of a new series, For All Mankind, produced by Battlestar Galactica creator, Ron Moore.

Ahead of the keynote, Apple also appeared to accidentally leak the new name for its iPad OS, revealing for the tablet will have its own operating system for the first time.

It later confirmed this during the event, when it officially debuted iPadOS.

Much of the event, however, was focused on the many updates coming with the new iOS 13.

‘iOS 12 has been installed on more systems than any other software,’ Cook said before introducing its successor, iOS 13.

App launch speeds will also be twice as fast, thanks to downloads shrinking by 50 percent and updates by 60 percent.

Apple took the wraps off its highly anticipated Dark Mode during the event on Monday, stating dramatically: ‘iOS now lives in the dark.’

The feature, which has long been available among its many competitors, boasts and inverted color palette for a sleeker design that’s easier on the eyes.

In addition, iOS 13 will include a newly-designed share sheet and brings updates for Safari, Mail, Notes, and Reminders.

‘Reminders is now smarter, and can guess when to remind you of certain tasks.’

Apple’s Photo app is also getting smarter, and will soon automatically separate your screenshots from your main images. iOS 13 will also come with more advanced photo editing options, including Portrait Lighting adjustments.

Apple Maps is also getting a major overhaul slated to become available by the end of 2019, with a focus on keeping things ‘private and secure.’

This will include a new favorites section for different locations, shareable lists, and personalized lists based on your trips.

And, it your location data will now come with more protections.

‘For the first time you can share your location with an app just once and then require it to ask again the next time it wants it.

‘And if you do choose to grant an app to continually monitor your location in the background, we’ll give you reports on what they’re up to.

‘Some apps try to infer your location through Bluetooth connections, etc. We’re shutting the door on that abuse as well.’

The App Store is now coming to the Watch itself, too.  ‘You can purchase and install an app directly on your watch,’ said Kevin Lynch, VP of Technology.

New Health apps will better track your activity, and Apple Watch will now even be able to tell you if the noises around you are too loud.

With the new feature, Watch users will be able to check noise levels and receive notifications when things get too loud.

‘And of course, this feature was designed with your privacy in mind. Does not record or save your audio. We think the noise app is really going to make a big impact.’

The new Cycle Tracker will be available with or without a watch, and will live inside the Health app. Users will be able to log the heaviness of their flow, and get notifications about their fertile window.

Cycle tracking – available with or without a watch, now in the Health app.

Apple Watch will also now come with Shazam built in, and it’s getting Siri web search results, the firm says.