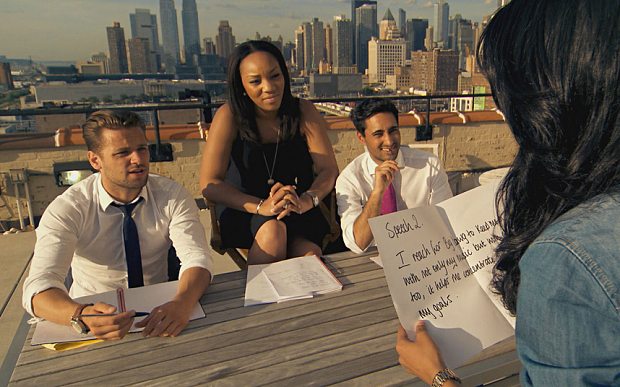 The task for the 10 remaining candidates was to come up with an ad campaign to launch a new soft drink in America and it was to include a TV advert, a website and a digital billboard. Then they’d have to pitch the finished products to advertising executives and industry experts. The tough ten also had to make their soft drink product too, all in four days, and with half of them in the US and half in the UK. So off the two teams went.

The PM post in Tenacity was fought over between Lauren and Mark, but Mark came up on top by misleading his team as to his actual job, but Bianca seemed to run unopposed in Summit. For some reason everyone wanted to fly to New York (shocker) and leave the hard work to the UK team and the places were hard won.

The losers were Daniel and Katie for Tenacity and Sanjay and Roisin for Summit. These unlucky candidates got to stay in the rain-sodden UK, develop a soft drink, its packaging and the digital advert, while the other six trotted off to make an advert in the sunshine.

Tenacity ended up with a fruity soft drink infused with vitamins called Aqua Fusion (‘Hydrated, Healthier, Happier’) and Summit decided on an energy drink, Big Dawg – Sugar liked this brand name but I can’t say that I did, although I’m not the target American market so maybe that’s the problem.

This episode was characterised by lots of in-fighting and petty disputes. Sanjay was generally unhappy to be the in the UK, as was Daniel, and both vocalised their concerns to an unsympathetic and irritated team mate audience who were quite happy in the Big Apple.

Felipe got in a flap but managed to direct Tenacity’s advert, which was nauseating, but at least it wasn’t as dull and pointless as Summit’s effort, which instead of leaving me wanting an energy drink, it left me wanting a nap. And I’m glossing over the cringe inducing auditions that both teams held to find the people to star in the adverts – James and Solomon in particular made gooey eyes at the poor girls before making a series of slightly ridiculous, innuendos that I can just hope the American actresses were oblivious to having not watched the Carry On films growing up.

When it came time to pitch, luckily, I had been bored enough during the episode to have time to build myself a brick wall next to the sofa on which to repeatedly bang my head. Lauren of Team Tenacity mumbled into her feet and fell over her words, while over in Summit Bianca did a decent pitch but James interjecting that a panel member had a nice jacket was a bit of a low point – that and the viewing of their advert of course!

And then after checking out their live billboards and letting Felipe have a little cry over the brilliance of it all, it was, thank goodness, time to get back to the boardroom.

Sugar it seemed was in the same mood as me, calling Tenacity’s Aqua Fusion labelling bland, the advert safe and the drink itself, “the Piers Morgan of drinks. It’s that bad.” Sugar liked the Big Dawg proposition but called their advert “borderline tragic”, “rubbish” and “less big dog and more Chihuahua”.

Summit was crowned king of the American Dream and went off to enjoy a rather small looking dinner and Tenacity were left Sugar’s wrath. I thought it might come to fisty-cuffs in the team as they argued over who was to blame for the failure. Sugar picked Mark up on his initial deception, Lauren on her lack of participation, Felipe on the advert and asked if Daniel was past his sell by date. Mark chose Lauren and Daniel to return to the boardroom with him and it was Lauren that lost her place in the competition in the end.

But for me, this episode wasn’t about winning, it was about losing, for everyone. I hardly found a slip of inspiration, brilliance or expertise from any of them – perhaps they’ve all just had enough? I vote for a revolt, where they rise up against Sugar and band together to create their own joint business, keeping the TV cameras of course, just so the rest of us don’t miss out on the madness.