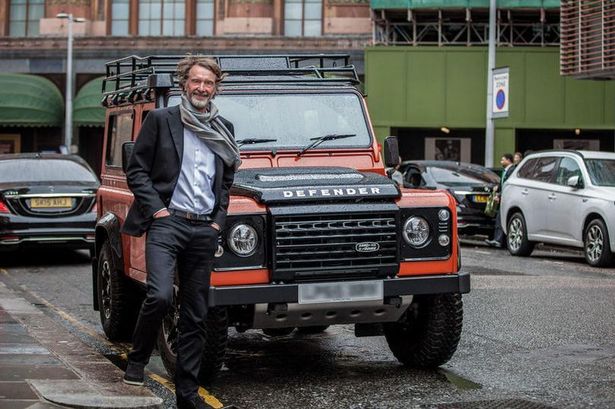 Billionaire Sir Jim Ratcliffe is on the verge of striking a deal to make his new Land Rover Defender-style vehicle in South Wales, officials say.

It was revealed in June that Ineos Automotive, the car-making arm of Ratcliffe’s sprawling empire, was considering a deal to build a new 4×4 in a plant next to Ford’s Bridgend factory which is due to close next year.

Now the Welsh Government says talks with Ineos about building the car in Wales are ‘very advanced’, raising hopes that hundreds of jobs could be created.

Ineos Automotive, which was set up to manage the 4×4 venture – dubbed ‘Projekt Grenadier’ – last week reported a €51 million (£46 million) loss for its first 11 months.

This was thanks to €41.4 million of research and development costs and administrative expenses of €8.8 million.

In its accounts, the firm said its new car would be a ‘rugged, reliable and uncompromising 4×4 offroad vehicle’.

Ineos, which plans to start production in 2021, confirmed it is ‘looking for a site capable of producing at least 25,000 cars a year to an extremely high standard’.

It added: ‘The company has considered greenfield sites, former car plants and existing production lines that could be reconfigured for the new vehicle.’

The accounts also contained a warning on Brexit, despite Ratcliffe being a supporter of the Leave campaign.

They said: ‘There is uncertainty as to the long-term impact that the UK leaving the European Union will have, but potential risks may include exchange rate volatility and potential adverse impacts to trading and supply arrangements.’

Several firms – also worried by a crackdown on diesel and other issues – have cut jobs and closed plants in recent months.

This deal broke down, but the firm is still in talks with the Welsh Government about using a site next to the plant.

He added: ‘I can’t disclose any detail about the talks because they are particularly sensitive at this time.’

Honda axed 400 jobs in Swindon last week ahead of the factory’s closure there in 2021, leaving 3,100 workers in place until the plant shuts.

The Japanese company said it had ‘considered the business needs and resource required between now and closure’.