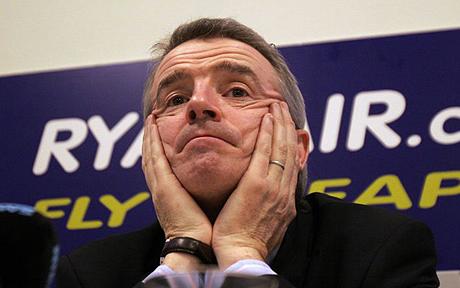 One bitcoin currently costs around £8,000, but if you ask Michael O’Leary, it’s dramatically overvalued.

The Ryanair chief executive has voiced his disapproval of bitcoin, which he likens to a ponzi scheme, and expressed the belief that the cryptocurrency is an unsound investment. O’Leary’s comments come in the wake of a crypto scam called Bitcoin Lifestyle that used a fake endorsement by him to promote the fraud.

Despite Bitcoin Lifestyle having no connection with bitcoin (BTC) or with O’Leary, it hasn’t stopped Ryanair’s senior exec from taking aim at bitcoin and everything it represents. As anyone who’s checked the BTC price chart lately will attest, however, bitcoin holds significant value to the millions of people who use it as a store of value, means of cross-border exchange, pseudonymous currency, and speculative asset. Bitcoin is up 60% for the year to date and many analysts are predicting it to reach new all-time highs within the next 12 months.

Riled by his likeness being used to flog a knock-off version of bitcoin, O’Leary has vowed “I have never, and would never, invest one cent in Bitcoin, which I believe is equivalent to a Ponzi scheme … I would strongly advise everyone with any shred of common sense to ignore this false story and avoid Bitcoin like a plague.”

Ryanair’s CEO is one of Ireland’s richest men and an entrepreneur whose business acumen speaks for itself. At 59, however, he is significantly older than the average bitcoin enthusiast, and can be forgiven for failing to understand its value proposition. Unfortunately, the first interaction that many British public figures including Michael O’Leary, Simon Cowell, Sir Philip Green, Holly Willoughby, Lord Sugar, and Jeremy Clarkson have with bitcoin is discovering they’ve been used to promote crypto scams they have supposedly endorsed and profited from.

With a net worth of £800 million, O’Leary has no need for speculating in highly volatile crypto assets. He’s already made it, and thus can afford to be dismissive of bitcoin. He’s certainly not the only HNW individual to have written off bitcoin out of hand. Billionaire Warren Buffett memorably called bitcoin “rat poison squared” and his stance on cryptocurrencies doesn’t appear to have softened, even after attending a charity lunch with several crypto influencers including Justin Sun, the founder of the TRON blockchain and cryptocurrency.

Why bitcoin is not, in any classic sense, a ponzi scheme, its meteoric rise in value over the past decade has attracted scammers. From Twitter giveaway scams, like the one that saw celebrity accounts commandeered by a teenage hacker, to fake news sites promoting Bitcoin Lifestyle with the “endorsement” of Michael O’Leary, scammers have been lured to bitcoin like bees to honey. While their efforts have served to taint bitcoin’s name, they haven’t diminished the function it was designed for, and which it still faithfully serves: uncensorable digital cash for the digital generation.