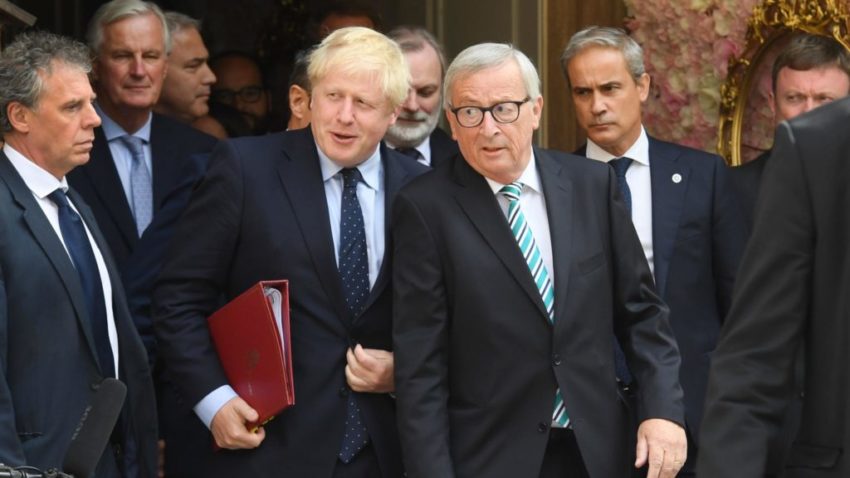 Boris Johnson will pursue his case for an Irish backstop alternative at the United Nations next week as British and EU negotiators prepare for daily talks.

The prime minister will speak to Donald Tusk, the president of the European Council, as well as French, German and other EU leaders on the sidelines of the UN general assembly in New York.

“Negotiations will continue at high speed,” he said, following a lunch of butter-roasted pollock and risotto in his native capital.

Mr Johnson said that he was “cautiously optimistic” about striking a deal in time for a House of Commons vote in late October but admitted “clearly it’s going to take some work”.

“It’s certainly the case that the commission is still officially sticking on their position that the backstop has got to be there. But clearly if they think that we can come up with alternatives, then I think they’re in the market. I think the big picture is that the commission would like to do a deal,” he told the BBC.

There will be daily technical talks on the detail of how an all-Ireland agrifood zone would work, carried out by David Frost, the prime minister’s chief negotiator. Political-level discussions will begin twice a week between Stephen Barclay, the Brexit secretary, and Michel Barnier, the EU’s lead on Brexit.

“We are now at the stage where we need to start accelerating the work and that was the agreement today,” Mr Johnson said. “There is a good chance of a deal, yes I can see the shape of it. Everybody can see roughly what could be done. But it will require movement.”

He added: “This is a difficult moment, we are very keen to do it but I don’t want people to think it is necessarily in the bag.”

Despite the positive signals, EU officials have continued to complain that the government has not tabled formal, written proposals — contradicting Mr Johnson’s claim that “papers have been shared”.

“President Juncker recalled that it is the UK’s responsibility to come forward with legally operational solutions,” a commission statement said. “Such proposals have not yet been made.”

The EU is not expecting detailed proposals until after Mr Johnson’s speech to the Conservative Party conference next month, which will leave only two weeks to conduct negotiations before a summit of European leaders on October 17.

Meanwhile there were further signs that both the Irish government and the Democratic Unionist Party were moving towards trying to reach a compromise. Sir Jeffrey Donaldson, the DUP’s chief whip, told RTÉ’s Morning Ireland that there could be “practical solutions” to avoid a hard border — admitting that these could include some checks on goods and produce passing from Britain to Northern Ireland.

“We want to avoid a hard border on the island so we are looking at ways in which we can find practical solutions that address this, in particular in areas like agri-food,” he said.

“The prime minister is meeting with Mr Juncker to discuss these. We’ve had an input and will continue to have an input to the formulation of the proposals of the UK government which I believe are gathering apace, so I believe it is possible to find practical solutions to the concerns that not only we have but that the Irish government have as well.”

Meanwhile, Ireland’s finance minister said he understood the fears that unionists had about the backstop.

“The government takes these concerns very seriously, as we do the concerns of everyone who is troubled by Brexit and its potential impacts on both parts of our island,” Paschal Donohoe said. “However, the backstop should not be viewed as a challenge to unionism. Its purpose is to provide certainty to businesses and communities on both sides of the border that they will be able to continue to operate and go about their daily lives as they do today — nothing more.

“It represents a compromise, it is not the status quo. It is not the same as Northern Ireland staying in the EU.”