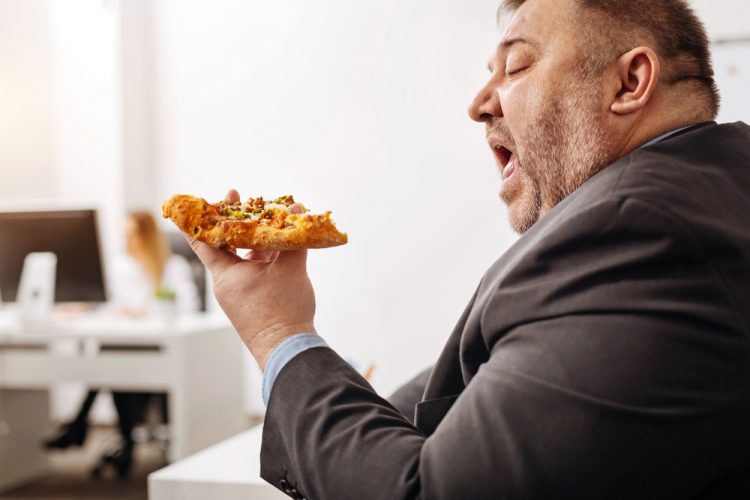 New research has discovered that the average office worker will consume as many as 3,295 calories per day – between 795 and 1,295 more than the recommended daily amount – leading to an annual weight gain of 9lbs per year.

Just 19 per cent of office workers won’t gain weight over the course of the year, due to leading a healthy lifestyle outside of work or being blessed with a high metabolism.

The research quizzed full time workers about their lifestyle and how working in an office affected their diet.

Initially, all respondents were asked ‘What do you consider to be the highlights of working in an office?’ to which the top responses were cited as ‘the friendships I’ve made’, ‘the benefits, i.e. bonuses/commission, perks, insurance, etc.’ and ‘the flexibility’.

All respondents were then asked ‘What do you consider to be the downsides to working in an office?’ to which ‘weight gain’ and ‘working long hours, outside of contract’ were revealed as the most common.

With weight gain appearing as a common issue for office workers, all respondents were then asked how many calories they estimated that they ate per day.

Once all estimations were submitted, the average was revealed to be 3,295 calories per day – between 795 and 1,295 more than the recommended daily allowance for British adults, depending on whether they’re male or female.

Furthermore, when asked what it was that tipped them over the edge when it came to their office eating habits, provided with a list of possible responses and told to select all that applied, British office workers revealed the following five to be their office diet downfalls:

Colleagues offering around snacks
Reaching for unhealthy breakfasts
Team lunches, either ordered in or out at a restaurant
Buying lunch from the canteen/local shop
The office tuck box/charity box

Additionally, more than half of respondents confessed to prepping their food for work each day, but more often than not purchased additional food or unhealthy food throughout the day.

According to the poll, when asked to estimate how much weight they gained per year whilst working in an office, the average weight gain was determined to be 9 pounds. Just 19 per cent stated that they didn’t gain weight annually, citing ‘I lead an active, healthy lifestyle outside of work’ and ‘I have a good metabolism’ for their lack of weight gain.

George Charles, spokesperson for www.VoucherCodesPro.co.uk, who commissioned the research, commented: “A lot of people around the UK have a job that requires even a small amount of manual labour, helping them to keep on their feet and keep a certain level of fitness. Office workers don’t have this, finding themselves sat down at a desk for at least eight hours a day, more if they’re working overtime, and when there are snacks floating around it’s hard not to get involved. It’s all about finding a balance; eat the snacks, but eat just as much fruit and veg – or better yet, get a gym membership and make time a few days a week to get a bit of exercise in, which will help to counteract the weight gain.”