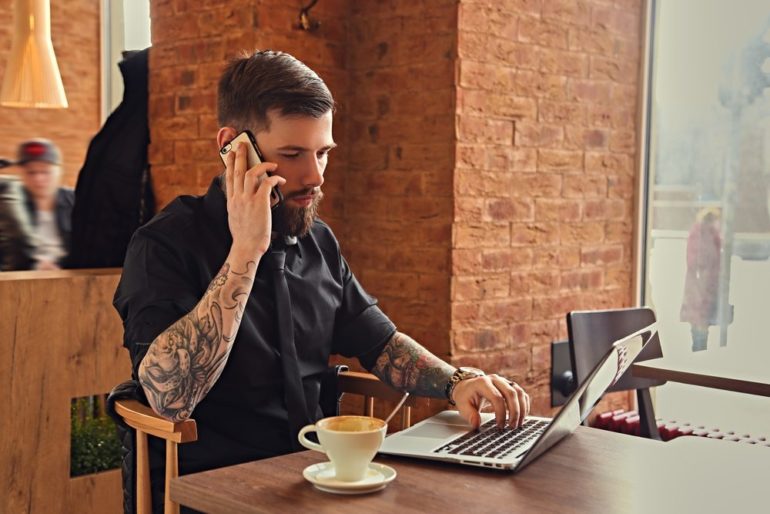 New research has been published today that reveals the value and work that is added to the British economy from people working out of coffee shops and the coining of a new term – the “Coffice”.

The size of the “Coffice” economy is extensive, as four out of five Brits have worked from a coffee shop and do so regularly.

The research discovered that 81 per cent of us spend roughly three and a half hours working from a coffee shop every week and it’s not just startups or self-employed workers doing so.

Business deals closed in a coffee shop represents an estimated £14.5 billion for the economy with one third of Brits having closed a business deal in a “coffice”.

Over half of respondents work from a coffee shop on a weekly basis with an average 93 minute stay and average spend of £10 on food/drink each working session. Whilst 43 per cent of us are concerned with the lack of privacy in a coffee shop, 1 in 3 people have attended a job interview there.

Moreover, the research revealed that nearly 70 per cent of respondents said their place of work supported the idea of working from a “coffice”, perhaps proving that companies are more forward-thinking than ever before.

Contrary to what might be a common assumption that the self-employed may be more partial to working in a coffee shop, 3 in 4 employees in large-sized businesses often decide to shun the office for the coffee shop – with the approval of their bosses no less.

These bosses may be increasingly aware of the added monetary value that working from a “coffice” brings. The data shows that coffee shop workers have great success in closing business deals, valued at an average of £1,732 each, representing an estimated £14.53 billion contribution to the UK economy.

The “coffice”, however, does come with its own costs. When considering travel and food/drink expenses, the average Brit spends over £2,160 a year working from a coffee shop, 8 per cent of their salary, and this climbs to nearly £2,600 for the self-employed worker. Suddenly the Wi-Fi isn’t so free.

If buying a hot drink is a form of “coffice” rent, then what is the coff-preneur’s drink of choice? In a thoroughly un-British turn of events, only 8 per cent of us choose a cup of tea to power our work. In fact, it is the Italian cappuccino that fires British business, closely followed by a latte.

Chris Reilly, Managing Director at MyVoucherCodes comments: “This new research shows the rise of the “coffice” as a place for Brits to work and cut business deals.

“With 13 per cent of us working out of a coffee shop every day and the UK coffee shop market experiencing strong growth that is forecast to continue, the “coffice” trend is also set to maintain popularity for a while yet.”