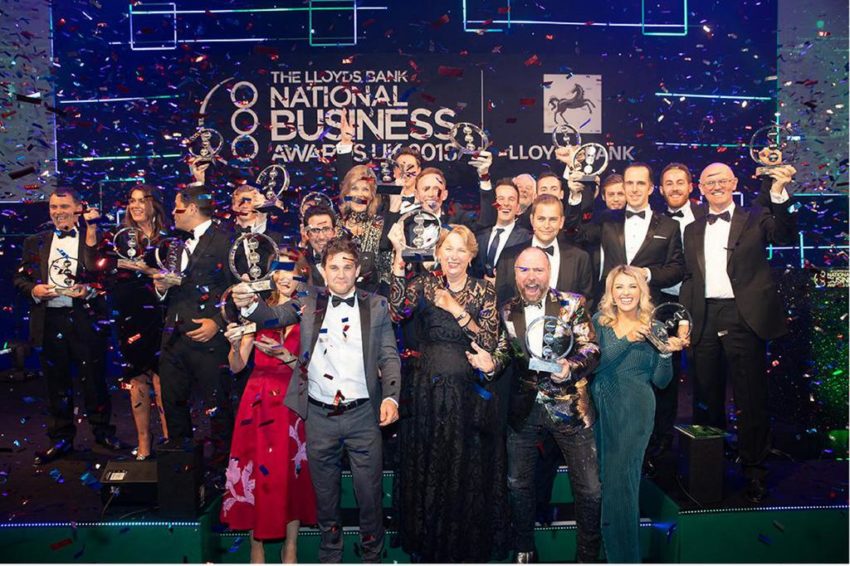 17 coveted trophies have been presented to the winners of the 17th Lloyds Bank National Business Awards.

The event was attended by over 1,200 business leaders, entrepreneurs, politicians and journalists in celebration of the ‘best of British ambition’.

This year’s 17 winners included Leader of the Year, which was presented to Virgin Money CEO Jayne- Gadhia, one of the most senior and highly-regarded women in the UK financial services industry. Gadhia founded challenger bankVirgin Money almost 25 years ago holding the role of CEO for the last 11 years.

Declan Curry, LBC Radio and former BBC Breakfast presenter, said of her: “Leaders have to deliver great financial returns, delight their customers and inspire their colleagues. We expect them to develop businesses that are resilient and nimble in the face of uncertainty and transformation. That’s the basic toolkit. But they also need something extra. They need to recognise the powerful role of business in creating opportunity and wealth, in discovering and nurturing talent and in building stronger, sustainable communities. They need to make business a trusted and respected force for good. Jayne-Anne Gadhia does this in spades.”

A brand-new category for 2018 – Outstanding Contribution– was awarded to Dame Helena Morrissey, founder of the 30% Club, which launched in the UK in 2010 to support and encourage corporates to have a gender balance on their boards of at least 30% women.Research suggests that 30% is the proportion when critical mass is reached – in a group setting, the voices of the minority group become heard in their own right, rather than simply representing the minority.

The 30% Club believes that gender balance on boards not only encourages better leadership and governance, but diversity further contributes to better all-round board performance, and ultimately increased corporate performance for both companies and their shareholders.

Sarah Austin, The Lloyds Bank National Business Awards Event Director, explained, “On behalf of event organisers UBM, I would like to extend the warmest of congratulations to all of this year’s winners. Our entrants face the most rigorous of judging processes, so it’s no mean feat getting on the shortlist of The Lloyds Bank National Business Awards, never mind actually winning one. But that’s why the awards are an accolade to true, world-class achievements. This year’s winners are truly outstanding

British businesses and we hope that these awards continue to succeed in offering them the credibility and encouragement to continue in their ambitious success.”

The remaining 15 The Lloyds Bank National Business Awards winners are:

The Lloyds Bank New Business of the Year:Gas Tag (Liverpool/London)

Gas Tag is game-changing technology that undermines cowboy gas fitters by providing real-time evidence of site visits, services and installations, and logging the efficiency of gas appliances in a single dashboard

The North Yorkshire force launched its Golden Nominal project after identifying the crippling impact not having a clear view of their data was having on keeping its community safe.

The Vonage Business Enabler of the Year: Rotaready (Croydon)

The Inflexion Entrepreneur of the Year: Margot Cooper – Limbs and Things (Bristol)

Cooper set up Limbs & Things in 1990 after having a vision of clinical education moving away from cadavers and animals. For many tasks, these were difficult to use and expensive, so she invented anatomically accurate and cost-effective models and simulators to allow students to become more competent and confident learners and professionals.

Founded in 1999, Nexus has successfully built the most extensive fleet in the highly competitive UK rental mobility market. In the last 18 months, it won more than 200 customers, including the largest fleet market contract for a major delivery company, had a record-breaking month in June with 11,500 vehicles out on rent on a single day, and secured its two millionth booking just last month.

London-based Shopper Media Group, which has grown from an initial investment of £1,000 to a turnover of nearly £30 million in just ten years

The Digital Business of the Year: minicabit (London)

minicabit credits its ‘plucky British attitude’ as a key driver behind its success in one of the most competitive, crowded and technologically exciting business sectors dominated by the seemingly unstoppable Uber and the British-owned Addison Lee.

The Fujitsu AI Pioneer of the Year Award: Signal (London)

Inaugural winner – Signal Media – is leading the charge in the AI space by using the technology to solve real business challenges. Its incredibly powerful AI engine is considered to be a game changer when it comes to media monitoring, reputation management and regulatory research – all vital business tools for engaging with, and understanding, customers.

The Duke of York New Entrepreneur of the Year:Ross Harper – Limbic Limited (London)

Set up just 13 months ago, Limbic AI is a team of scientists and software engineers seeking to understand the neuroscience of emotion.

The Daily Sparkle (Devon): a dementia friendly newspaper designed to bring calm and joy to patients by helping to evoke fond memories and spark

Based in Glasgow, M Squared designs and engineersproducts and applications for a diverse range of industries, from frontier science and advanced manufacturing, to oil and gas research, and space technology. Its work in the medical sector has been particularly pioneering, with cross-sector partnerships leading to life-changing breakthroughs in areas as diverse as dementia research and cancer diagnosis, as well as business applications including whisky maturation.

Vision Support Services is a leading global textile company that manufactures performance and luxury textiles for the hospitality, healthcare and retail markets.

The Employer of the Year:UK Fast (Manchester)

2018 winner UKFast has a self-proclaimed obsession with people and goes all out to reward hard work and commitment and believes it is the best place in the world to work thanks to ‘a brilliant working environment with continuous professional development and amazing perks’.

The Lloyds Bank Small to Medium-Sized Business of the Year:Net World Sports (Wrexham)

Net World Sports was founded by Alex Horen who started selling sports equipment to fellow pupils at just 13. 17 years on and the Welsh businessman now runs a multi-million international organisation, which he believes sells more football equipment worldwide than any other company