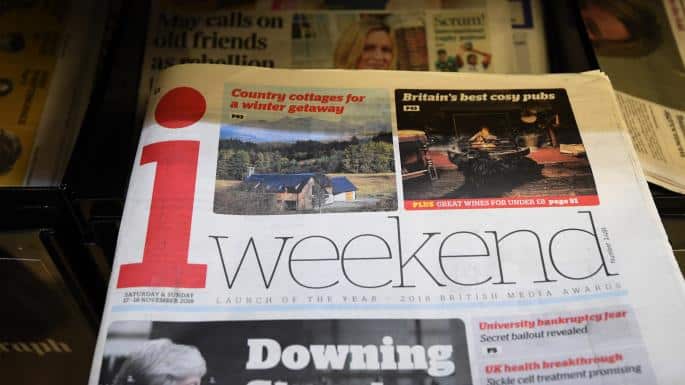 The owner of the Daily Mail is buying the i newspaper and website for £50 million, vowing to preserve the liberal-minded title’s editorial independence.

The Daily Mail and General Trust (DMGT), which also publishes the Metro freesheet, said that the acquisition would boost cashflow and provide opportunities to cut costs.

The i, which was formerly part of the Independent stable, generated £11 million of cash operating income and operating profit from £34 million of revenue last year. It first appeared in 2010 and now sells 170,000 papers on week days and 190,000 copies on Saturdays, DMGT said.

“We are delighted to welcome the i to our stable of media brands. We are committed to preserving its distinctive, high quality and politically independent editorial style,” Viscount Rothermere, chairman of DMGT, said.

The deal, which will need to be cleared by the Competition and Markets Authority, is the latest in a series of defensive deals in an industry still struggling with the shift from physical to digital. News publishers have been left shaken by the migration of advertising revenues to Google and Facebook, prompting consolidation especially among owners of regional titles.

The i has been on the auction block since its erstwhile owner, Johnston Press, fell into administration a year ago. The company collapsed under the weight of a £220 million debt pile and was seized by its creditors, who renamed the company JPI Media and are carving up its assets.

The fate of its portfolio of regional titles, which included The Yorkshire Post and Sunderland Echo, was thrown into uncertainty this morning after Reach, the publisher of the Mirror and Express newspapers, said it had pulled out of takeover talks. “We didn’t think it would deliver value. We have a responsibility to our shareholders and our pension scheme,” Jim Mullen, chief executive of Reach, said.

DMGT’s origins date back to 1896 when the brothers Alfred and Harold Harmsworth printed the first edition of the Daily Mail. DMGT is controlled by Lord Rothermere, 51, a descendant of Harold Harmsworth, who controls a majority of the voting rights in the quoted company.

Its media wing, including the Daily Mail, The Mail on Sunday, Metro and the Mail Online website, accounts for about 47 per cent of turnover. It has a broad mix of businesses, providing specialised information to the insurance, property, energy, education and finance sectors.

Lord Rothermere said that the acquisition was “strategically and financially compelling”. There was “scope for potential synergies in the future” from DMGT’s “existing infrastructure and in advertising sales”, he added.