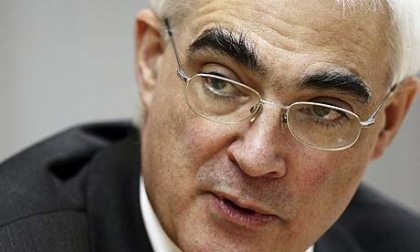 Mr Darling said that he will grill each bank to ascertain why they appear
to be penalising small businesses by charging high interest rates for credit
facilities when the base rate is at just 0.5 per cent.

The base rate is the cost at which large banks can borrow money from the Bank
of England but banks are then at liberty to charge their own rate of
interest to their customers.

Mr Darling is worried that the banks are taking advantage of cheap lending
costs for themselves but not passing on the reduced borrowing costs to
businesses desperate for capital.

The Chancellor will this afternoon remind the banks that the financial system
— of which they form a major part — has benefited from substantial bail-out
funds from the taxpayer and that they are obliged to assist businesses
without exploiting low interest rates for their own gain.

While Lloyds Banking Group and RBS, which are part state-owned, have signed up
to commit to increase their lending commitments overall, there are no formal
obligations governing the rates they can charge.

The Treasury is trying to tread a fine line in the confrontation with banks.
On the one hand it is trying to make sure that businesses are fed with the
credit facilities they need to survive but on the other hand, the Government
wants to allow the banks to continue to run themselves as commercial
entities so that they can be sold back to the private sector and yield a
profit for the taxpayer.

Vince Cable, Liberal Democrat Treasury spokesman, said it was “amazing” that
Mr Darling had “only just woken up” to the problem.

“We have been warning about the lending crisis, including in Government-owned
banks, for months.”