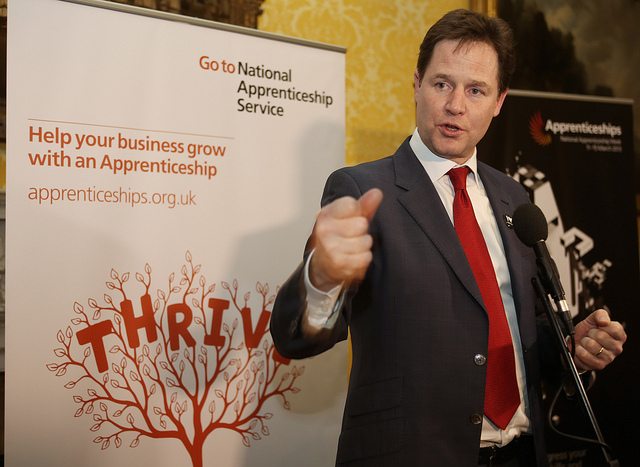 Made by apprentices, kicked off at the National Apprenticeship Week Admiralty House reception hosted by the Deputy Prime Minster and will go onto recognise the contribution of apprentices around the country, by asking them to put their names to their handiwork.

The wider campaign will see employers across the country join together to highlight the productivity of apprentices and encourage more businesses to offer Apprenticeships.

Initially focussed on regional events and national social media activity, the campaign will continue with colleges and employers encouraged to stage local events to celebrate the products and services made by apprentices throughout the year.

The campaign will culminate in activity during the summer to promote Apprenticeships to employers and as an exciting career route to school leavers.

Among the employers taking part in the nationwide campaign are apprentices from BAE Systems in Barrow-in-Furness, Berthon Boat Company in Dorset, fashion brand Dr Martens in Northamptonshire, Monarch Airlines in Luton and the V&A Museum in London. Apprentices at each have made a small piece of history by signing their names on a submarine, a refurbished yacht, iconic DM boots, an aeroplane and a theatre exhibition.

Deputy Prime Minister, Nick Clegg, said: “Apprentices not only make an invaluable contribution to their employer, but to the economy as a whole.

“I’m delighted to welcome so many apprentices to Admiralty House, to recognise their hard work and achievement and to see their creative talents, such fashion design and car engineering, showcased. Apprenticeships should be seen as just as valuable as academic qualifications and give hard-working young people the chance to aim high for their dream job.”

Canapés for the reception were made by apprentices from Greene King and Spirit Pub Company, who are trained by Charnwood Training Group, and Restaurant Associates (part of Compass Group). They were served to VIPs by De Vere Hospitality Academy apprentices. Meanwhile, apprentices from Aston Martin, Bentley and Huddersfield Textile Centre of Excellence exhibited the luxury cars and fashion products they have created.

Apprentice champion of the year, BAE System’s Jenny Westworth who spoke at the Admiralty House launch event. Jenny said: “My Apprenticeship was the best possible career choice I could have made. It allowed me to work out what my strengths and weaknesses were before making a firm choice on what I actually wanted to do. It has helped make me a far better engineer and has provided me with the foundations for a really exciting career.

“It’s the hands on experience from day one that makes Apprenticeships stand out. Employers give you a high level of responsibility whilst you’re learning on the job, which means you develop skills very quickly.”

As National Apprenticeship Week draws to a close, employers and colleges are being encouraged to follow suit by getting their apprentices to make their mark on the goods or services they produce and post their pictures via Twitter, Flickr and Pinterest using the hashtags #Madebyapprentices and #NAW2013. The best images will be featured on the Prime Minister’s Pinterest Page and the National Apprenticeship Service will continue to promote ‘made by apprentices’ throughout the year.

David Way, Chief Executive of the National Apprenticeship Service, said: “Apprentices are vital to businesses up and down the country, so it’s great to see them getting the recognition they deserve and giving them the chance to put their own stamp on some of Britain’s most iconic products. National Apprenticeship Week is a chance for employers to celebrate how Apprenticeships deliver for their business and I would encourage more to post or tweet pictures of their own goods or services which are made by apprentices.”

The Deputy Prime Minister was also joined at the reception by apprentices from companies he has visited throughout the country, as well as by runners-up and winners up of the National Apprenticeship Awards 2012.