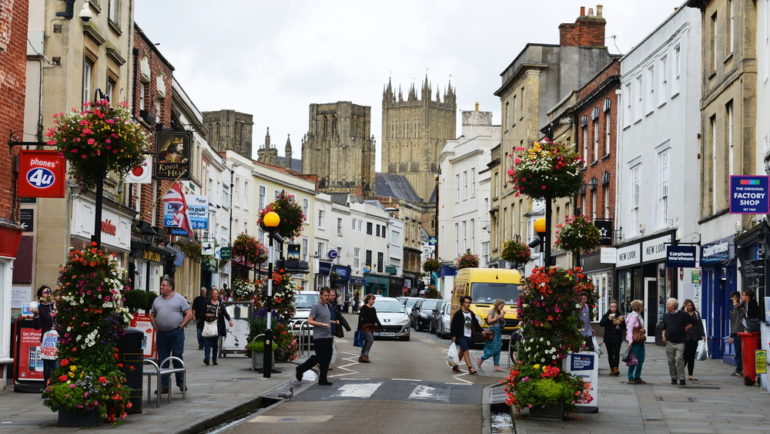 Britain’s struggling high streets must fight back against the likes of Amazon by forming super-powerful consortiums, an ex-government business adviser warned yesterday.

Independent retailers lack the resources to compete with internet giants and multinational retailers need to team-up to level the playing field if they are to survive – and thrive in – the next decade, Jeremy Harbour said.

Local shops and businesses should join forces to create large, single conglomerates that are less vulnerable to online giants and which are capable of withstanding the online “onslaught”.

Harbour says this could be achieved by forming public limited companies (PLCs) from several businesses. Capital would be raised by selling shares on the stock market.

Owners would acquire a stake in the parent corporation while retaining autonomous control of their own firms. Most would become millionaires in the process, he added.

Unlike smaller outlets, PLCs have the clout to win lucrative global contracts and to distribute their wares internationally, get better deal on banking and payment processing.

They also have the funds to innovate and bring new products to market, and the necessary reserves to weather a downturn in trade.

Harbour’s strategy – described by experts as “economic brilliance” – could not only save the High Street but restore it to its bustling heyday of the 1970s.

It could also create tens of thousands of jobs and rejuvenate town centres nationwide.

Harbour is a former adviser to the House of Commons, the current advisory director at both The Mint National Bank and DBS Business Class, and the CEO of private equity firm The Unity Group.

Speaking yesterday at The Harbour Club, an international organisation he founded to help people buy and sell businesses, he said now is the time that retailers must “adapt or die”.

He said: “SMEs are the backbone of the UK economy, representing around 50 per cent of the national annual GDP and 98 per cent of private sector employment, yet many are struggling to compete with the onslaught of online retail giants.

“One of the biggest challenges is that they do not compete with the likes of Amazon on a level playing field. Unlike the online giants, high street retailers typically face major barriers to floating on the stock exchange, depriving them of vital investment and access to new markets.

“However, by joining forces and forming a PLC, the retailers can even the odds and fight back. To some degree, they can become insulated from the current high street massacre  – at least to the point of being financially capable of surviving a downturn in trade.”

Harbour, a serial entrepreneur who won the Coutts Entrepreneur of the Year runner-up prize three times running, added: “The concept of SMEs such as high street stores forming a PLC is, admittedly, unorthodox but it is essential if they are to survive and thrive in the next decade.”

The UK’s high streets suffered 5,855 store closures in 2017 as major fashion outlets, shoe shops, toy stores, travel agents and estate agents have been driven out by the rise of internet shopping.

An average of 11 stores-a-day opened, while 16-a-day closed, according to analysis of the UK’s top 500 towns. The data does not include independent shops, which are among the most vulnerable and the first to go.

The closures reportedly resulted in the loss of 50,000 retail jobs in the first half of this year alone.

The taxman will pocket a predicted £30.8billion from business rates this year, with the vast majority coming from retailers in the hearts of towns and cities.

Online stores pay much less in both rates and corporation tax, enabling them to aggressively undercut local competition.

Harbour, one of the UK’s leading experts on mergers and acquisitions, said even the most successful high street businesses must collaborate if they want to survive into the 2030s.

Until now, small and medium-sized companies (SMES) which wanted to join forces and float on the stock market as a single corporation have been ‘roll-ups’ organised by private equity firms – an expensive process that requires one to buy the other outright, often using mountains of debt that go on to kill the business in the future.

This often results in job losses as the new corporation looks to reduce its overheads. The owners also  lose control of the business, including its name and brand values.

SMEs do have the option of floating individually on AIM, the London Stock Exchange’s junior international market for smaller companies.

But doing so is risky because small businesses often fail to attract investment, and the resources required to launch an Initial Public Offering (IPO) can push them to breaking point.

Harbour, whose Harbour Club training courses run four times a year in the UK, says the solution lies in ‘agglomeration’ –  a new trademarked business model he devised that allows numerous SMEs to float as a single diverse corporation more easily and with far less risk.

The more SMEs that join – there is no limit – the more value that is added to the new corporation and the more attractive it becomes to investors.

It is more beneficial for business owners because they form part of the new corporation’s board whilst retaining complete control of their own firms.

Owners are also issued with shares, which can then be sold on the stock exchange. Subject to the value of those shares, board members can become “extremely wealthy” in the process.

The strategy is ‘open source’, meaning that it can be adopted for free by shopkeepers on every high street across the UK.

SMEs who collaborate in this way can expect to substantially increase turnover and net profit, Harbour said.

The wealth would, in turn, trickle down to the local community through the creation of new employment opportunities.

Whilst the model has not yet been adopted for high street retailers, it has already been proven in other sectors,  Harbour’s firm, The Unity Group, listed MBH Corporation – a UK company, with a group of SMEs listed on the stock market in Germany.

He said: “The Agglomeration model unlocks the true potential of SMEs and gives them the opportunity to not only survive an age of internet shopping but flourish alongside the internet giants.”

Harbour added: “The High Street has been in crisis for many, many years and the decline in sales shows no sign of abating.

“This model has the potential of rejuvenating the High Street whilst keeping it diverse.”