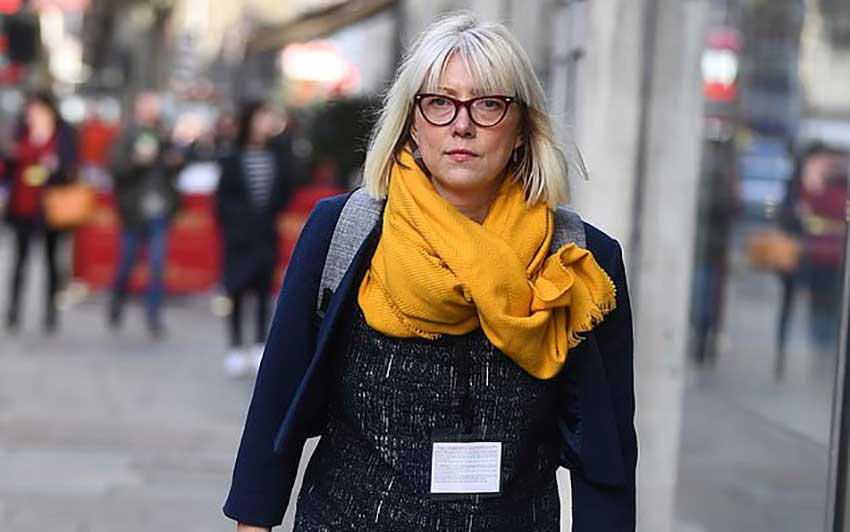 Rebecca Burke, 43, of Yately, Hampshire, was paid a basic salary of £110,000 as she helped lead the firm’s cyber security programme after a high-profile data breach.

She alleges she was blindsided with redundancy after running both the programme and a £20million trial project to bring fibre optic broadband to three million homes.

During redundancy talks she found three other male programme directors had salaries up to 40 per cent higher than hers and were given at least 50 per cent more in bonuses.

She was made redundant 15 months after leading the programme following the scandal which cost the firm up to £77million in lost business affecting 150,000 customers.

Ms Burke has worked in the project management sector for 21 years, after graduating from Kingston University in 2007 with a master’s degree in business administration.

Before being recruited onto Programme Lightning at TalkTalk she earned about £130,000 a year as programme director for a partnership project between Airbus Space and Defence, and the Ministry of Justice.

In April 2015 she took on the ‘strategic and exciting’ role as Chief Delivery Officer, hoping to eventually progress in the long-term to Chief Operating Officer role.

She was directly accountable for the delivery of this project, using TalkTalk’s new project management strategy ‘change framework’. York was a flagship project for a fibre optic network TalkTalk hoped to then roll out across the UK.

She was responsible for managing projects as well as achieving corporate objectives at Talk Talk alongside Daniel Rynehart, Jonathan Ellison and Daniel Richardson, who she is comparing her role with as part of her pay dispute.

Ms Burke was set specific tasks, such as delivering a new fibre optic network for York, and other objectives including achieving 80 per cent customer satisfaction.

In 2015 the newly appointed’ Group Change Director, Tom Webber, explained they would be working in an ‘agile way to enable the quick deployment of resources into TalkTalk’s priority programme areas’.

Ms Burke said in her statement: ‘I did discuss some concerns that I had around the redeployment to shared services with Tom Webber at the time.

‘I was concerned that I would be moved from the Lightning Programme whilst it was waiting for funding, but I was told that the rationale for the shared services was so that project staff could be deployed between projects according to business priority.’

‘The programme was a success, reaching 3 million households despite competition from larger competitors, my outstanding leadership of this programme was placed onto TalkTalk’s Executive Incentive Scheme.’

In December 2015 Mr Webber recruited Ms Burke onto the Cyber Security Programme which she worked on alongside Lightning, taking up her evening and weekends.

Ms Burke said she had taken on this role without additional pay, except for a £5,000 discretionary bonus after an annual review with Mr Webber.

‘I have come to learn that particular team members spoke about me in very critical and offensive terms,’ Ms Burke said.

‘I was unaware of their views of me until I saw the respondent’s disclosure and certainly no such criticisms were ever shared with me during my appraisals or my 1-2-1 meetings.

‘In January 2017 (the) security programme was no longer considered TalkTalk’s highest priority, and therefore would no longer require a programme director to oversee its delivery.

‘In the proceeding months I worked to handover to Derek Cheng, the new Chief Security Officer and Scott Traynor who was a Change Manager (who sat below the Programme Directors in the structure) who had been awarded a temporary promotion to ‘Portfolio Manager’.

‘Tom announced the decision regarding Scott’s appointment and my continuing work in Lightning in an email on January 16, 2018.’

The email read: ‘Since we launched our Security priority last year, it has been supported by Rebecca Burke who very admirably stepped in to fill the role immediately after the Data Breach at the end of 2015.

‘Rebecca has been fundamentally involved in shaping the portfolio and supporting the early stages of its delivery as well as keeping the Lightning pilot in York running at the same time!’

Ms Burke was taken off the security project and returned to the Lightning project in York but described clashing with another staff member, John Rees, in March 2017.

‘In March 2017 difficulties arose again between me and John Rees.

‘My line manager at the time Richard Sinclair spoke to John about his disruptive behaviour. John was widely known in the organisation as being difficult and he also had a reputation for sexist attitudes towards women.

‘I believe that this was the reason why John clashed with me as much as he did.

‘I was not alone in my views. In the investigation notes to my grievance appeal I note that Tom Webber acknowledged that there may have been undertones of chauvinistic behaviour by John.

Ms Burke was made redundant not long after this.

‘I was told that the scope of the Lightning programme had been reduced, and a Programme Director was no longer necessary to run this programme,’ she said. ‘This was simply not true.

‘I was also told that until my redundancy was confirmed it was expected that I would work within the business as usual and agree my work priorities with Richard. I felt that I was getting very mixed messages from this email.

‘On one hand it was clear from the email that confirming my redundancy was simply going to be a formality and that the outcome had been decided, however on the other hand I was to continue with business and planning my priorities as usual, despite being told that the need for my role no longer existed.’

On May 23, 2017 Ms Burke emailed Mark Lewis in HR asking why she had not been considered for one of several suitable roles, since other Programme Directors had been given other roles.

She wrote: ‘I believe that the scope of the Lightning programme had not changed, and that my role was split between two colleagues Alex Cain (a Band C Change Manager) and Phil Eayres (a Band B Transformation Director) following my departure.

‘I was also advised in the same letter that it was proposed that my employment would end on July 31, 2017 by reason of redundancy. I believe that the decision to dismiss me had already been made, and I believe that my redundancy was a sham.

‘The proposal to make me redundant did not make any sense. My work in this area was growing and my role and expertise were still very much required.

‘I had had two very successful years at TalkTalk and of all the Programme Director’s I had the greatest amount of experience and knowledge of the Lightning Programme and I certainly had the skills and the experience to carry out the contract management aspects of the role.

Ms Burke’s voiced concerns about her surprise redundancy to Mr Webber on 22 June 2017.

‘At this meeting I was advised by Tom Webber that I was not pooled with the other programme directors as they were in a higher banding than me and had larger portfolios than me,’ she wrote.

‘This was the first time I became aware that I may be being treated differently in terms of my pay, benefits and grading as my male peers.

‘Two weeks before I was placed at risk of redundancy I was asked to hand over all the Future Cities work to Nick Dale and Phil Eayres.

‘The reason I was given by Tom was that Future Cities had been removed from the programme’s scope.

‘It is clear from the respondent’s annual reports that the work on Future Cities continued in earnest and has now led to the award of and an initial £250m investment to create a new Infrastructure Company to deliver the FTTP product to three million homes.’

Ms Burke then voiced her grievances with TalkTalk at a redundancy appeal hearing on June 29, 2017 only to learn her appeal had been rejected three weeks later.

‘It was clear to me that the work required for the life cycle of the Lightning programme was being artificially and rigidly divided in order to contrive a reason for my redundancy.

‘The appeal outcome also records that the reason that the other Programme Directors had not been placed at risk was because they were more senior than I was.

‘In my grievance I set out my understanding, based on my experience of the team and what I had been told when I moved to the Change Shared Services structure, that all programme directors would be inter-changeable on projects..

‘I also recall Tom Webber commenting that there would need to be changes to pay and grades to reflect that we were all on the same level doing the same work.

‘This would suggest that at that time our pay was different. At the time I thought we were all on very similar grades and pay.

‘However, as set out above this was not the case. I am not aware of any justification for paying me less than my male colleagues as I had over 20 years of relevant experience and my performance reviews whilst working at TalkTalk were excellent.

‘I was placed on the Executive Incentive Scheme in recognition of my work.

‘The summary of the outcome was that my comparators were responsible for more capex and more employees, and therefore, their work was not the same as mine and was of higher value.

‘This comparison was completed on the basis of the single smallest programme I was accountable for at TalkTalk, and did not take any account of the Future Cities or Security Programmes.

‘I could not understand how it was possible for TalkTalk to reach the conclusion that my role and responsibilities were smaller than my comparators. This simply was not the case.’

Ms Burke claims she was never told she was at risk of redundancy, nor given an opportunity to apply for an alternative role during restructuring of the company.

Under the Equality Act 2010 (previously Equal Pay Act (1970), it is illegal to pay employees performing the same job or ‘work of equivalent value’ differently because of their gender.

TalkTalk has an average gender pay gap of 14.6 per cent and an average bonus gap of 31.6 per cent, according to the company’s 2018 Gender Pay Report.

She is an MBA with more than 20 years’ experience in project, programme and portfolio management in technology, innovation, mobile, TV and telecoms.

A TalkTalk spokesman has said: ‘We strongly refute these claims and we do not tolerate gender discrimination of any sort.’