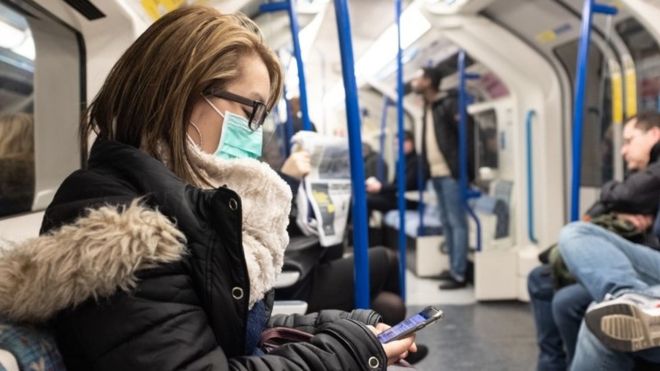 Face coverings are to be compulsory on public transport to control the spread of coronavirus, prompting calls for similar rules in shops.

Grant Shapps, the transport secretary, said that all passengers using trains, trams, the London Underground, ferries, aircraft and buses would be required to cover their mouth and nose two months after he dismissed the idea as “counterproductive”.

Passengers are expected to use a scarf or homemade covering to avoid shortages of clinical facemasks for NHS and care workers, with ministers publishing a make-your-own guide.

Masks will become mandatory under national “conditions of travel”, with passengers potentially prevented from boarding without them. Travellers who do not comply can also be fined, with enforcement carried out by police. The level of penalty has yet to be revealed.

The change will be introduced in England on June 15, with exemptions for disabled people, young children and those with breathing difficulties. Staff will wear coverings at all times.

Toughening the present guidelines, which merely recommend a face covering, is designed to coincide with a rise in the number of people returning to work as more shops and businesses reopen.

Speaking at the daily Downing Street press conference, Mr Shapps said that the majority of people should continue to avoid public transport wherever possible, particularly in the rush hour. However, he suggested that face coverings would enable the transport system to carry more passengers.

“With more people using transport, the evidence suggests wearing face coverings offers some, albeit limited, protection against the spread of the virus,” he said. The number of people using the Tube in London rose by a fifth this week compared with last week.

Labour accused the government of being slow to act. Sadiq Khan, the mayor of London, called for the move two months ago. At the time, Mr Shapps dismissed it as counterproductive, saying that masks did not “provide that much protection” and gave passengers a false sense of security.

The government’s Scientific Advisory Group for Emergencies (Sage) recommended in April that homemade face coverings might help to reduce spread, but said the evidence was weak and the effect was likely to be small. Masks were judged useful in “enclosed spaces where social distancing is not possible consistently”, with Sage citing transport and shops as examples.

Sage insisted that masks must not be used to vary the two-metre rule and social distancing remained more important. Homemade masks are thought to do little to protect the wearer, but some scientists judge they will reduce the risk of someone passing on infection by catching droplets containing the virus.

Professor Azeem Majeed, of Imperial College London, said that facemasks “should also be worn in shops”. He pointed out that in South Korea after they were made compulsory on public transport “in other locations, wearing masks has become the norm”.

Jim McMahon, the shadow transport secretary, said the government had been too slow. “Two months ago, Labour immediately backed the mayor of London’s call for face coverings on public transport to be compulsory. Yet only now Tory ministers are acting.”

Masks are not yet compulsory in Scotland and Wales. Nicola Sturgeon, the Scottish first minister, said that she would “strongly encourage” people to wear them in shops and on public transport.