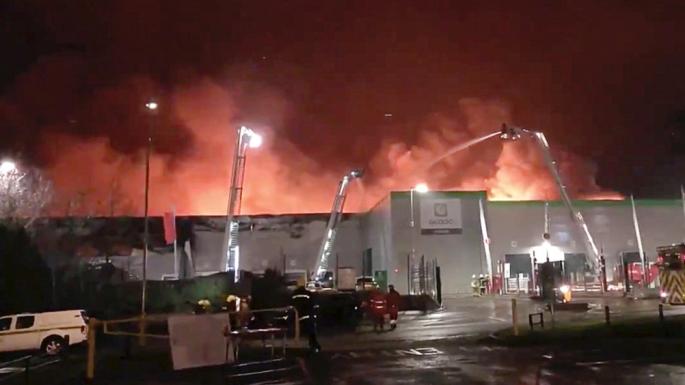 Ocado had to cancel deliveries last night after a fire broke out at its newest warehouse, only six months after a blaze destroyed another of its robot-controlled depots in Hampshire.

Four fire engines were called to the robotic warehouse in Erith, southeast London, and it took 25 firefighters over three hours to control the fire.

Ocado said that the fire broke out in a skip for waste packaging just outside its warehouse, which has only been open for a year, at about 7pm yesterday. A conveyor belt and external motor was damaged by the fire, the London Fire Brigade said. The cause of the fire is being investigated.

A spokesman for the online grocer said that the company’s robots in Erith had “absolutely nothing to do with the fire” and that it had not spread inside the warehouse or affected any of its mechanical handling equipment. There had been earlier reports of firefighters using cutting machinery to gain access to the building. A London Fire Brigade spokesman said that a sprinkler system had helped to suppress the fire.

In February Ocado’s Andover facility was engulfed by a blaze which took firefighters three days to put out. Hundreds of homes had to be evacuated. The cause of the fire was blamed on a detection system failure and staff who had turned off the sprinklers, a report last month revealed.

Firefighters at the time said that extinguishing the blaze at the Andover robotic warehouse had been complicated because it had not been designed for humans.

Tim Steiner, Ocado’s chief executive, said in March that he was “not concerned that there is a fundamental issue with the design”.

Ocado said that it had to cancel customer orders because of disruption to its picking processes at its Erith site but that all affected customers were being offered a re-booking.

“We sincerely apologise to those customers affected for the inconvenience this causes,” the company said.

The destruction of its Andover site led Ocado to take back capacity at its Erith warehouse from Morrisons in exchange for a “payment holiday” and the provision of more services at its supermarkets. Ocado said before the Erith fire that that warehouse was processing 150,000 orders a week.