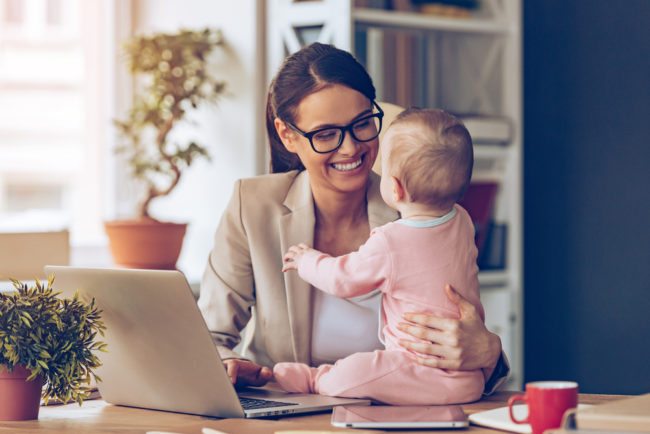 Nearly half of working mums think working flexibly has affected their ability to progress their career, although almost three quarters identify flexible work as crucial to getting more women into senior roles, according to a new survey.

The survey shows the impact on women’s careers if they work flexibly – whether part time, some degree of homeworking, flexi hours or some other form of flexibility.

Yet it also shows that mums feel flexible working is vital for them to manage work and family life. In fact 60 per cent of those who work flexibly would like more flexibility, such as more homeworking or more use of job shares, and 73 per cent believe flexible working and flexi opportunities in senior roles are key to career progression.

However over half of those women surveyed said that they are worried their flexible working will be taken away from them.

The lack of availability of senior flexible roles means many women have had to take pay cuts to get flexibility – 44 per cent say they earn less than before they had children with just 27 per cent earning more. The lack of women in senior positions in organisations is also a key contributor to the gender pay gap.

Far from the stereotype that flexible workers are less committed, 67 per cent of mums feel they have to work harder because of unconscious bias in the workplace.

Workingmums.co.uk promotes best practice in flexible working and highlighting the benefits for all of normalising flexible working. That includes dads who research shows are keen to spend more time with their families. Some 24 per cent of dads work flexibly, according to the Workingmums.co.uk survey, although only 4 per cent of these work reduced hours, a figure that has barely changed over the last few years. Part of the barrier to dads working flexibly is the perception that it will damage their careers.

One woman who has benefited from flexible working to progress her career is Vicky Sandry, General Counsel for the UK and Ireland at Sky, named Workingmums.co.uk Top Overall Employer in 2016. She says: “I’ve worked part time since returning from my first maternity leave in 2004 – first four days a week and then 3.5 days a week. Whilst working part time I’ve had two significant promotions, the first in 2005, to run the Regulatory & Competition legal team, and the second in July to my current role. It has been challenging, but I feel lucky to have the best of both worlds – an incredibly interesting and engaging job, and the ability to spend time with the boys and I wouldn’t change it for anything.”

Gillian Nissim, founder of Workingmums.co.uk, says: “There is a clear link between the availability of flexible working, women’s career progression and the gender pay gap. Too many women are not achieving their potential because organisations just don’t understand the benefits all round of creating good flexible working opportunities. That is a waste of their skills and a loss to employers. It is not enough to retain women after maternity leave or attract them back through returner programmes. The culture has to be sufficient to enable them to stay. It is not just women, either. Growing numbers of dads are feeling frustrated at the strait jacket of 9 to 5 and want more input into family life. A work culture that does not recognise that the majority of employees have or will have families is not a culture that is fit for the future.”